Tales of the Double (Race Report)

Saturday morning. Nine am, meeting at the boat. My double partner Vojtech had to get up at 4AM to arrive in time from Ostrava. Romana and I got to the race course by 8AM so we had time for a morning coffee from the Black Dogs coffee company. I am not sure how the black dogs contributed to the coffee, but at least there is a dog in the picture: 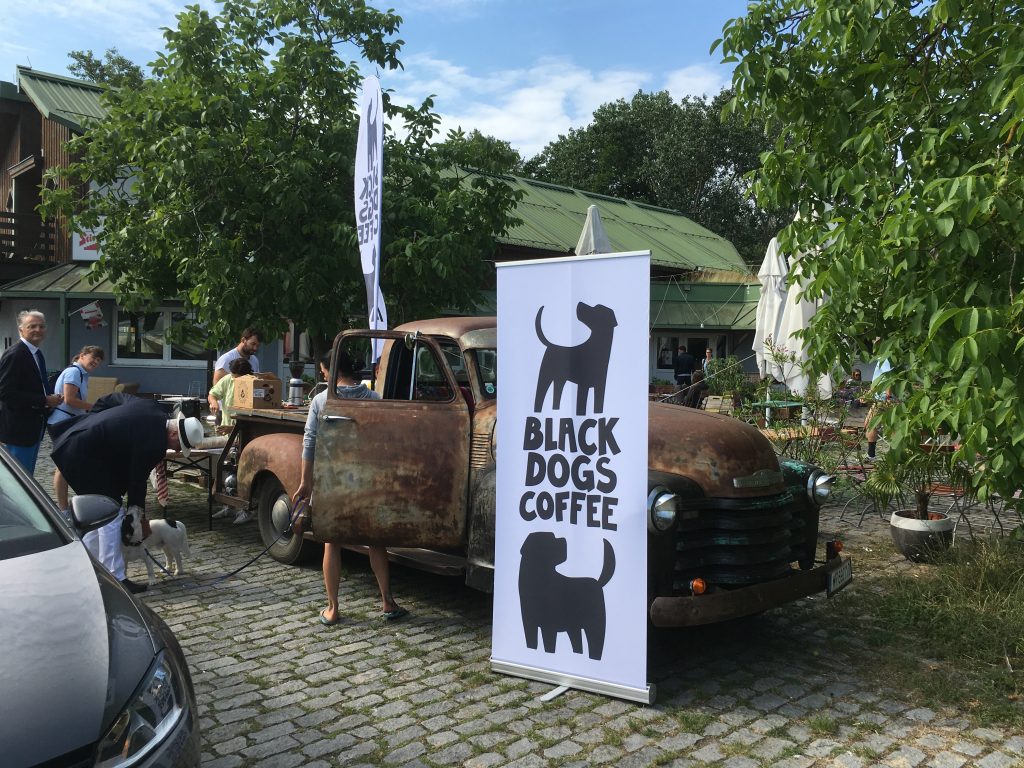 There was a pretty strong headwind. Rowing to the start, Vojtech and I did a few 10 stroke bursts, and we did some practice starts which were pretty good.

On the real startline, we were just three boats. The Masters rowing scene in Austria is a bit smaller it seems. There was a Vienna/Graz combination, a boat from Bohemians Prague, and us.

Our race start was a disaster. We caught a semi crab. Not a real hard crab, but the kind where the boat just starts to roll and you can’t row full pressure. We corrected for that in the second stroke, but we were already behind.

In the first 500m, we managed to row to second position, but we led the Prague guys get out too far in the front. I was expecting them to crumble in the second 500m but that didn’t happen. These chaps have been training hard in the winter.

In the end, even the Austrian crew started to pass us and beat us on the finish line.

Talking to the Prague guys confirmed that they have been putting in the hours through the winter, and also, they have done a bit more racing this season than us in Moravia. These were the first kilometers that Vojtech and I rowed together. We are definitely not fast (yet?).

As Vojtech, later that day, proceeded to win the Masters D 1x with ease, it shows that the watts are there on his part, so it is either my lack of power or just bad rowing in the 2x. I hope it is the latter. There is a lot that can go wrong when racing in the double. I do note that in the single, Vojtech has a very short stroke, and we both have to change our rowing quite a bit to row together. 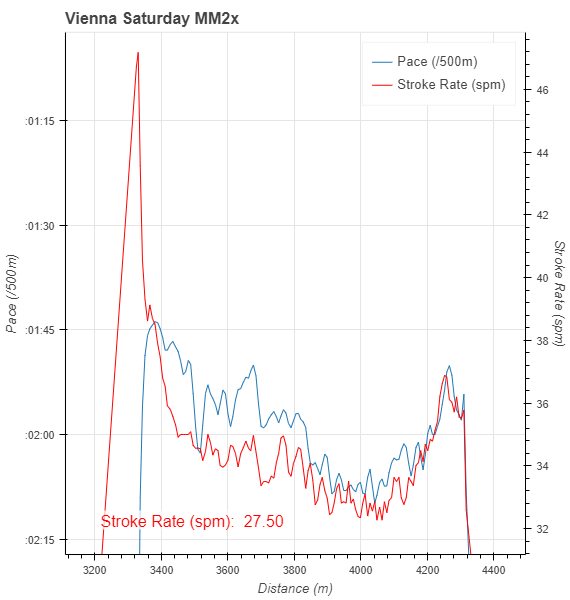 Respect for the chaps from Bohemians!

Four boats at the start. The Helbig family from Graz, a crew from Linz (Sames/Nigl-Eder) and a crew from the Vienna rowing club Donau (Bertagnoli/Bandera). And us. Michael Helbig had stroked the MM C 2x which had beat us on the finish line. The others were unknown to me.

Still a pretty strong headwind. But we shouldn’t be a slow crew.

Our race start was terrific. From peripheral vision I knew the other boats were right with us, but I didn’t want to look and just pushed out the first ten strokes, then settled to race pace. 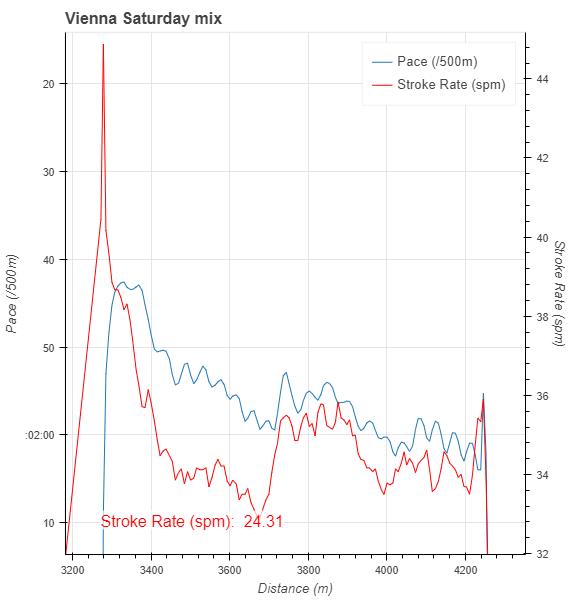 Romana later told me that we were leading, but I wasn’t aware of it. About 20 strokes in, I was dealing with waves coming in from the left (a launch wake that just caught us in the highest lane, not the others, I think). Romana later told me that that was were Graz was passing us. By the time I was checking on the situation, we were in second position, half a boat length behind Graz and leading by half a boat length on Vienna.

I also heard the lady on the Graz bow make some weird noises and I called for a power 20. You can clearly see that moment in the stroke rate data in the chart above.

We passed Graz and they stopped rowing. I mean, completely stopped rowing. DNF. Not sure what was going on there. I suspect that Michael went out too fast for the lady to hold it, and she had cramp or other problems.

Now we were leading and I was eager to build out our lead to something a bit more comfortable. About 25 strokes later, Romana asked me: “Are we going to keep this stroke rate all the way to the finish?”

My first thought was: “That is a pretty long sentence to say with 400m to go, so hell yes!”

My second thought was: “Perhaps she wants us to calm down the pace a bit?”

I think the second thought was the better, so I said: “Calming the stroke rate” and so we did. This great picture was taken in the final stages of the race: 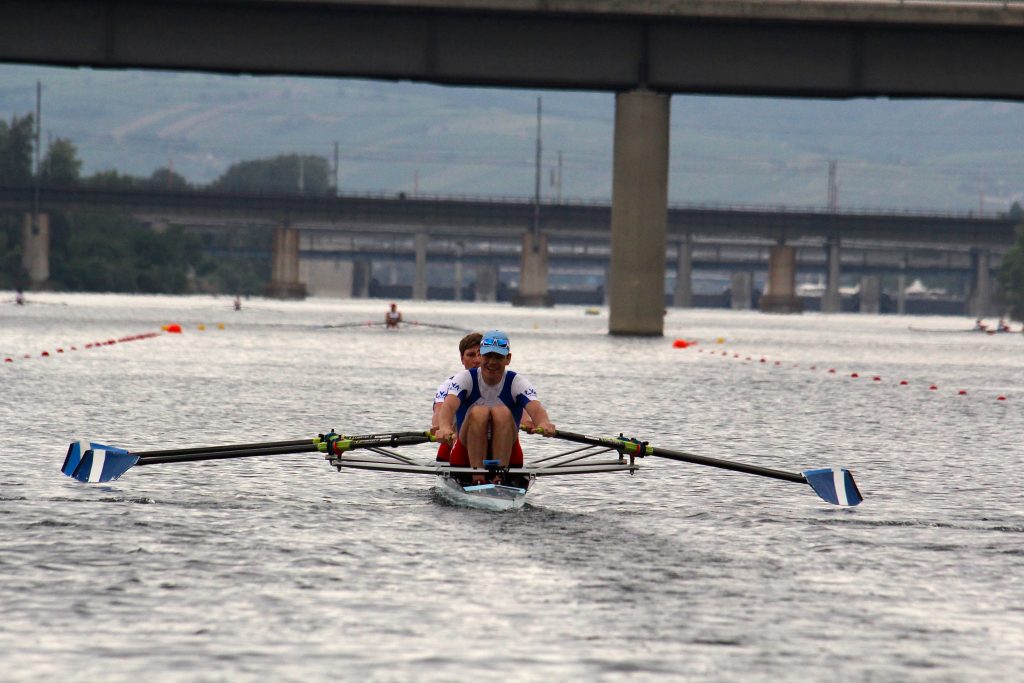 The Vienna crew was more than two boat lengths behind now, so there was no reason to be concerned. In front of the grandstand we did a 5 stroke “sprint” just to show off and that was that. 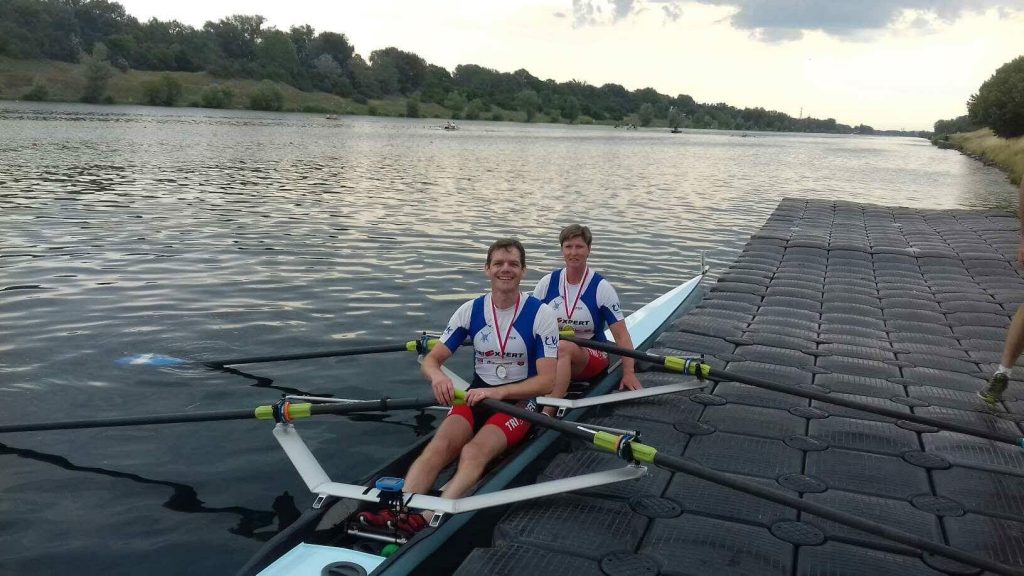 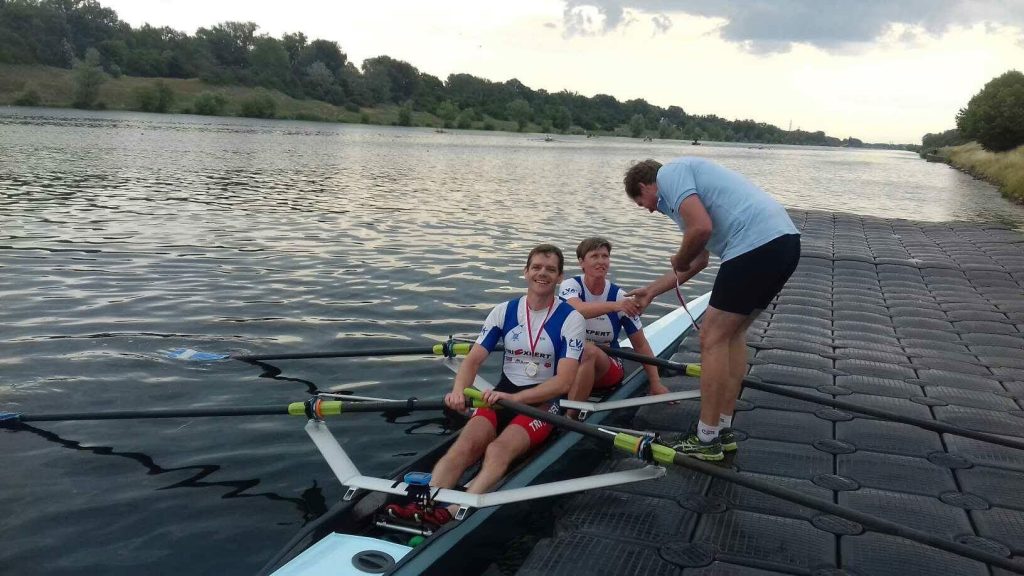 We went and picked up our medal and then we did a pretty long cooling down row in the cooling down zone. While we rowed the last 2km back to the dock, the wind had calmed down and the water was flat, and we locked in a magical 20spm with a great rhythm. It’s nice rowing with a medal around your neck.

It shows that rowing a double takes practice. Romana and I have done our kilometers together and that paid off.

We went back to the hotel and had a great Italian dinner, where we were joined by Veronika, Romana’s double partner.