I only had time for a weights workout in the gym close to the office.

No time for a workout. It was a planned rest day anyway, to get rested before the races of Saturday evening. I worked from home, then headed to the rowing club at 3pm to join the rest of the club and travel to Prague in a bus and a minivan. We arrived at the rowing club CVK Praha at 6:30pm. The juniors went for a quick row, and then we headed to the hotel.

It was already late, so dinner consisted of a quick bite at Burger King next to the hotel. Then it was time to go to bed and get well rested for a long day of racing. I was looking forward to it. Primatorky are a very interesting race. The race is held in the middle of Prague, and the only disciplines rowed are 1x (only Men and Women open) and 8+ (all age/gender groups). There is always an impressive finish area, and usually the weather is nice.

The lady coxswain in one of the pictures is Martina, the trainer of the Juniors of Slavia rowing club in Prague. I have much more to tell about her below, so read on.

Races started at 9:30am, so I joined the “athlete bus” at 8. I could have slept longer and take an Uber or public transport, but I was interested to see the other races. Also, the terrace of CVK Praha rowing club is a nice place to have a coffee, read a bit, and chat with friends. Compared to our budget hotel room in an uniteresting part of Prague, it is definitely better.

The plan unfolded without surprises. I spent two hours catching up on the Prague rowing stories, saw our Men’s single scullers go for a quick training (and almost getting a warning for not obeying the traffic pattern) and watched my son Dominik race his heat in the Boys (<14yr) 8+. They won their heat easily and qualified for the semifinals.

Our Juniors 8+ came 2nd in the heat (even though leading with 300m to go) but they won the Repechage and qualified for the semifinals.

Romana’s Women’s 8+ raced their heat and had to go to the Repechage.

Then, Romana and I had lunch and we took the tram to the finish area.

We had an ice coffee and waited for Dominik’s race. Meanwhile, the sky had changed from completely blue to cloudy.

Dominik won his Semi with a large margin and so they were in Sunday’s finals. We took the tram back to the start, because Romana’s girls had to get ready for their repechage.

I took my position on the balcony of CVK Praha rowing club, with a great view of the race starts.

The clouds had become more threatening, and I could hear thunder and saw lightning in the distance. We all took out our phones and started monitoring the weather reports. It was not good. And by 5pm it got pretty dramatic. 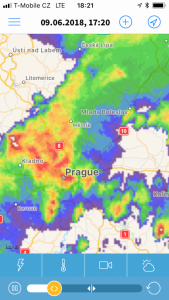 At 5pm I had to go inside because it started raining hard. Within 5 minutes hard rain had changed to very hard rain and strong wind. It was basically a white spray outside and there was zero visibility. Martin went out to check if our boats had been tied to the slings and returned entirely wet. I was watching some poplar trees that were bending dramatically.

Around that time, I heard that the races hadn’t been stopped and that our Boys (<16yr – not the boat with my son) were out on the water. I moved from the club house to the boat house to join a concerned group of people from our club. There was little we could do. We watched how the wind blew away the portable toilets, taking one eight with them.

It was a terrible 15 minutes, but then we saw our boys 8+ arriving at the dock. We helped them secure the boat and sent them to the warm showers. I went to see them in the changing room, and I now have a lot of respect for their stroke and cox. They were at the start pontoon but decided, while the race organization was still paralyzed, to not race and row back to the club. A very wise decision. I later heard that the officials had still started this race and let it go on in wind and hail.

By that time the races had been stopped for 2 hours. Our 7:10 pm start in the Masters 8+ was moved to 9:10pm. I wondered how they would move a program that ran officially until 8:30pm by 2 hours?

We all gathered in the club house and waited for further instructions. The weather had calmed down now and I was preparing to get changed to racing gear, when the official announcement came that all semifinals had been moved to Sunday morning and the Masters races had been cancelled. I guess it was, finally, a wise decision. Here are some pictures from other parts of Prague, after the rain.

We all got in the buses and were driven to the hotel. After a quick shower and putting on dry clothes, Romana and I decided to head to the Vinohrady quarter and have a dinner in a nice restaurant.

At the end of the dinner, the restaurant was visited by 5 guys dressed only in towels. They had been surprised by the rain and gotten completely wet. Then a lady living nearby had invited them to her appartment to dry their clothes, and while they were waiting for their clothes to be dried, they decided to go to the restaurant on the other side of the street to have a drink.

After a very nice dinner, Romana and I headed back to the river for the Masters party. The party was on a boat in the finish area, and we joined the other Masters who hadn’t raced.

That is also where we heard a couple of frightening stories.

On that second story, we first thought they were tourists from a pedalo, but on Sunday it became clear that it was a group of four people playing geocaching. They had entered a dry tunnel to find the cache. Then they were suprised by a flash flood which spit them out into the river. One person from that group was later found dead, and another is still missing. Martina noticed two people “swimming” in the river, and noticed that from a nearby river boat somebody threw a rescue ring at them and then jumped in the water. She (mother of 2 children) jumped on her launch and helped with the rescue, getting the two drowning people out of the water. Some pictures taken from the river boat. 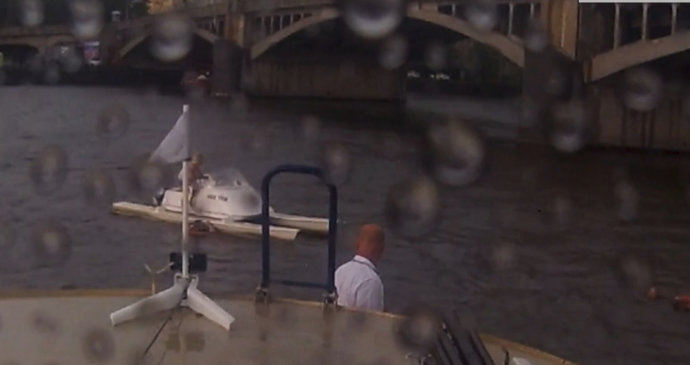 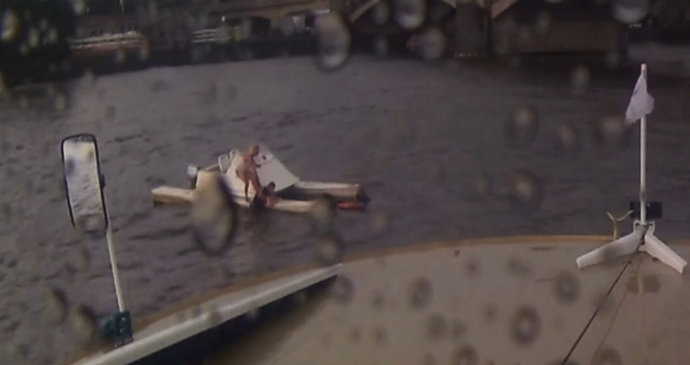 Dramatic video footage from the rescue here. That video also shows (towards the end) some cellphone video of the weather conditions. Watch it, because my description above is quite inadequate.

I already respected her as a trainer and knew her to be a very nice person. What she did on Saturday was heroic and admirable. Here’s another interview with her, taken on Sunday and another video of the conditions.

The weather was nice again, and Romana and I went to the finish area to watch our son’s final races.

Here’s the video. My son is in the blue boat coming second:

Then, I took a train to Brno, hoping to be back in time to get a OTW row in the single. Meanwhile, our Juniors won their final race, and our U23 single sculler Ondrej Cermak won the Men’s Open 1x final in a great race. I watched it on TV in the evening. It was great to see our club (and our sponsors) being so successful at these races. Here is a link to the Czech TV broadcast of the event. Our juniors start at 8:45 minutes in and our single sculler at 1:08:00 in.

I didn’t manage to get in a row on Sunday. My car was parked at the rowing club, so I took the public transport to the lake. By the time I arrived there, there was a fierce thunderstorm (not as bad as Saturday’s Prague one) and by the time the sky was clear again, there wasn’t any time left to row. I waited for the bus and the trailer to arrive from Prague, congratulated all our winning crews, and drove home with Dominik.