Riding the bus in a rowing uni and flip flops

You will have to read until the bottom of this post to understand the weird title.

It’s been a while since my last blog post. In the beginning of August, we went on a vacation to Italy and had a great time. I purposely did not do any planned exercise, but there was plenty of (sea) swimming, hiking, and bike riding. Nothing very intensive.

After my vacation I was back in the office for four long days. I did manage to get two rows in, one in the single and one in the double with Romana.

Then, I hopped on a plane to India and spent a week in Bangalore. Working days were long and I prioritized socializing with my Indian colleagues over any structured working out. It’s the off season.

Now I am back and it’s time to prepare for the head race season. I am looking forward to it. This year, I am doing three races over three weekends. I start early October with a 6k head race in the single, then, two weeks later, the Prague Head (mixed 8+), and finally the Novembervieren in Amsterdam, rowing a 4x with my old rowing mate and two other guys.

I did my planning for the 2018/19 season and the main events in the run-up to the first head race are long, hard distance pieces in the single. Using the power values given by the Empower Oarlock, these pieces give me good info on where I stand, helping me to select a sustainable power for the 6k head race. I started last Thursday with a 10k piece. I targeted 200W. 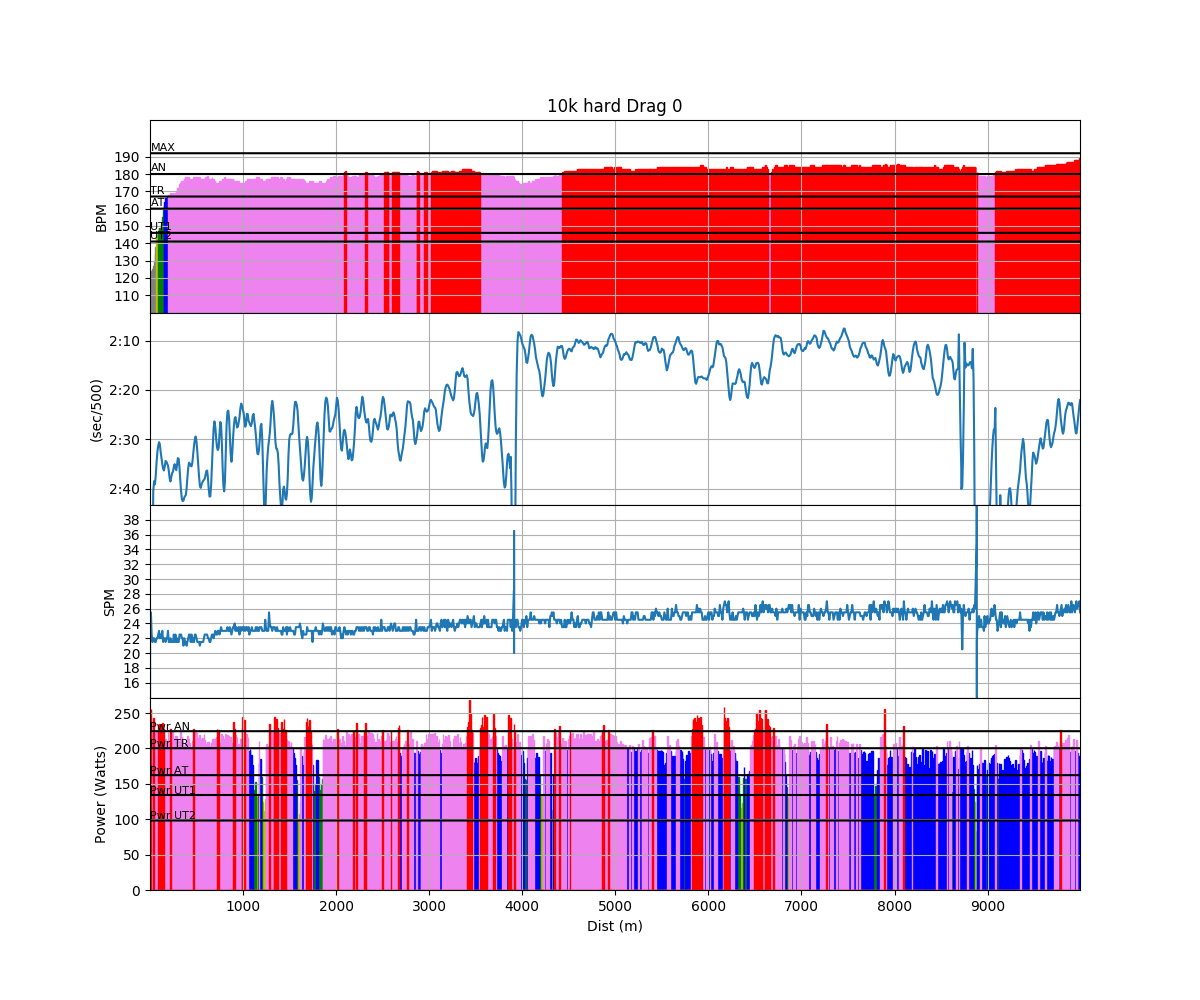 It was pretty winy and choppy, and it was hard. I had to row this in the gorge, but because the lake water level is low because of the the draught, we cannot row all the way up to Bityska, have to turn at the castle and thus I had to start and finish on a very choppy lake. You can see the power and pace starting to drop aroun 7500m when I returned to the lake. With 1000m to go, I decided to turn again and stay on the north end of the lake to avoid the worst chop (white caps).

I was slightly disappointed by the power levels, but I did hold a 198W average power, and that is including two 180 degree turns and rowing in the chop.

I spent the weekend cycling through the South Moravian vineyards with Romana (and getting very wet on Saturday, when we were riding in heavy rain).

Today, I arrived at the club around 6pm, and got ready for another hard distance piece. First I had to chat with our medal winners from the U23 European Championships (silver in the LW 4x-). There was a frenzy of activity on the club. The kids had raced in Litomerice and there was a trailer to unload and boats to wash.

I told everybody I was going to go out on the single and set off for the workout. 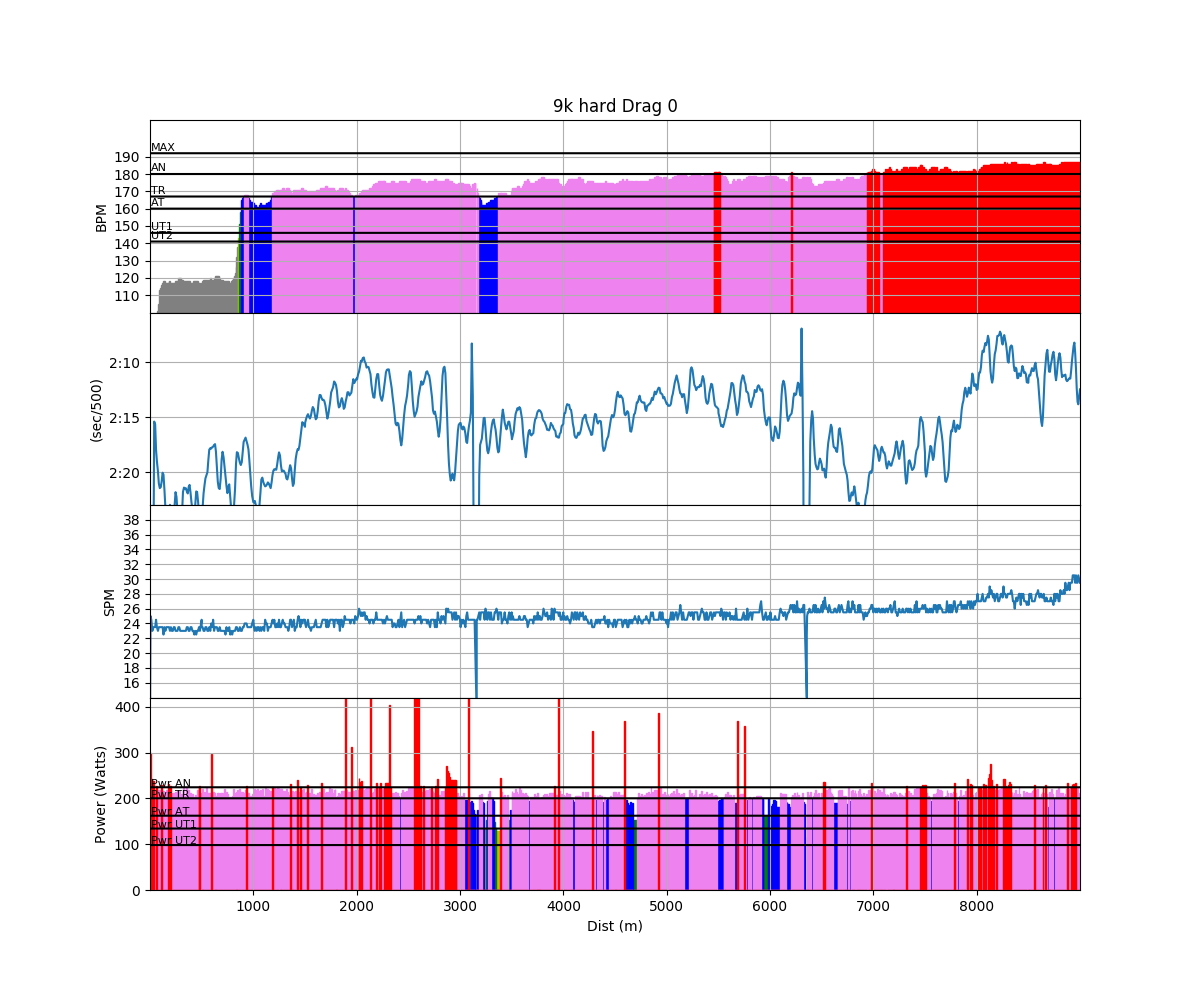 Pretty calm weather today. Just a slightly nasty crosswind making the 1k part on the south end of the lake a little slower. You can see that in the chart between 0 and 1000m and between 6200m and 7800m. The heart rate sensor had some difficulties in the first 1000m.

The average power was 211W (224W rPower, higher because the turns are lowering the average) and I liked how I rowed, especially the part between 4000m and 6000m where I think I hit a pretty efficient stroke, not too hard on the catch and with a clean tap down. The final 2000m were a struggle, and especially the final 500m required a bit of toughness to keep going.

That was a good 41 minutes of rowing.

I did a very slow cooling down. And that was the moment where I will explain the title of this blog post.

They did forget to clean up two pairs of slings, so at least I could get my boat out on dry land. Then I had to think. My car was on the parking, locked. All my other stuff was in the dressing room and I literally had what I was wearing, plus a seat pad, a half empty bottle of water and a NK SpeedCoach. Plus an empty battery that I had replaced in the Empower oarlock.

There was only one option. I climbed over the rowing club fence, hiked 15 minutes to the nearest tram stop, took tram 1 for a few stops, changed to trolley bus 30, then took bus 70 to the bus stop nearest to my house. I was wearing my sweaty rowing uni and flip flops. I didn’t have my bus card with me, nor did I have any ID. If I had been checked by a ticket control, I would have to explain and if they wouldn’t believe me they would probably take me to a police station. Luckily that didn’t happen. It was a bit unpleasant how people were looking at me, but I could deal with that. At home, I rang the door bell, and then explained the situation to my beloved wife. We got in her car and she dropped me off at the rowing club. Using her keys, I was able to get in, get a shower, clean up the boat, get into my car and drive home.

I guess I have learned a lesson and will not rely on ‘the usual training times’ any more, and take the keys with me in the boat as I do on my morning outings.

Adding Empower Oarlock metrics for later analysis. I have lost an hour riding the bus in a rowing uni, so I have no time to do a deeper analysis. I think the values are reasonable.