So the week started well with a hard 9k in the single. Still got an “amber” score on my training plan because it was harder than anticipated:

On Tuesday, I did a weights session. The first weights session after vacation, and as expected it created shoulder and breast muscle soreness for two days.

On Wednesday, we had the inaugural training for “Head of Prague”, in the mixed 8+. This one was easier and shorter than planned, although I suspect that I pushed the power a bit harder than what rowsandall.com estimates based on boat speed and stroke rate. We had some replacement rowers which definitely didn’t pull as hard as Martin and I in the “engine room”. 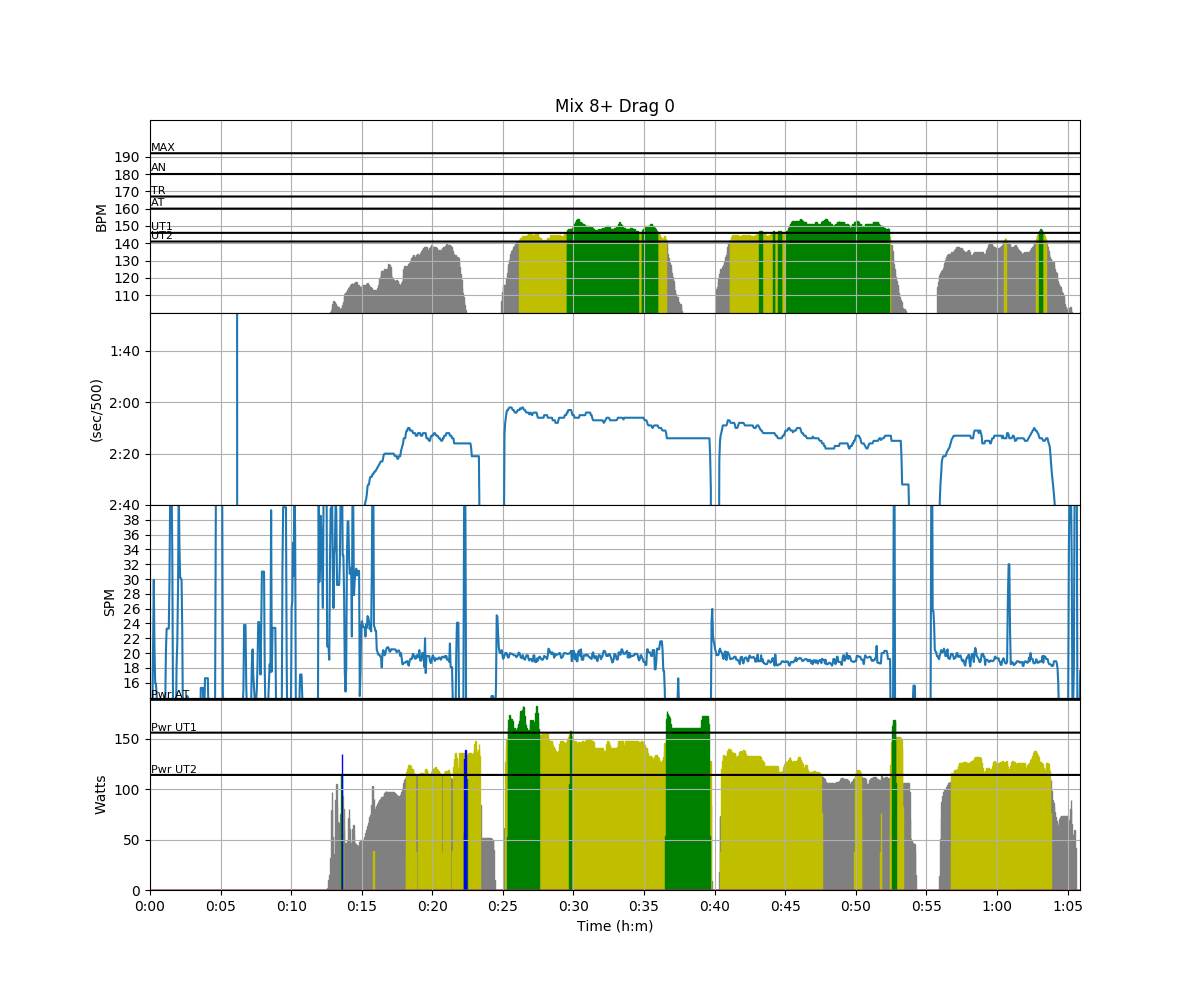 Thursday’s steady state in the single was a very nice one. I had chartered Martin to be my sparring partner and we were about the same speed. 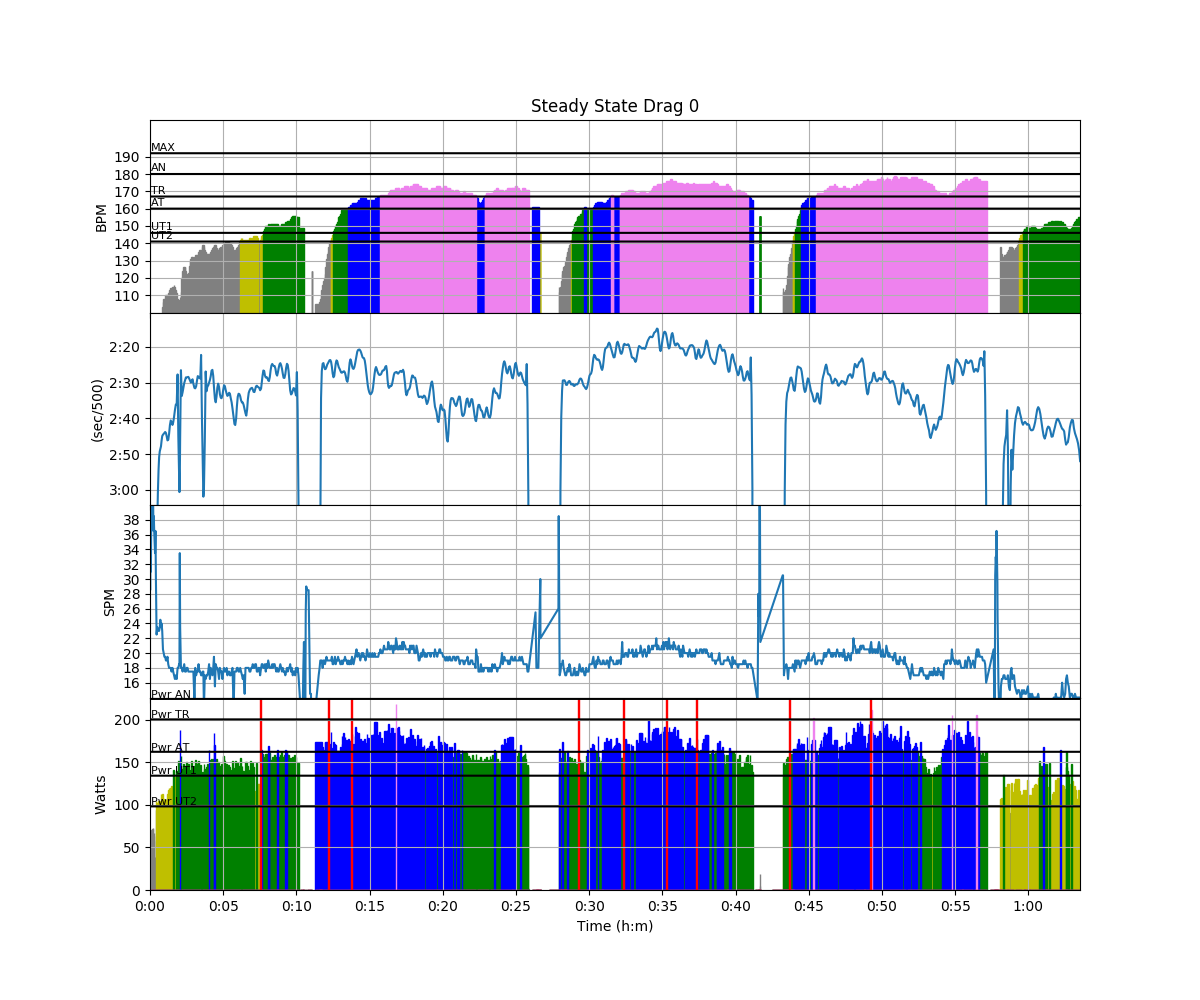 The last full lake stretch was interesting. I was experimenting with “waiting” a bit longer around the finish. Here is a plot of distance per stroke when I was doing my normal stroke: 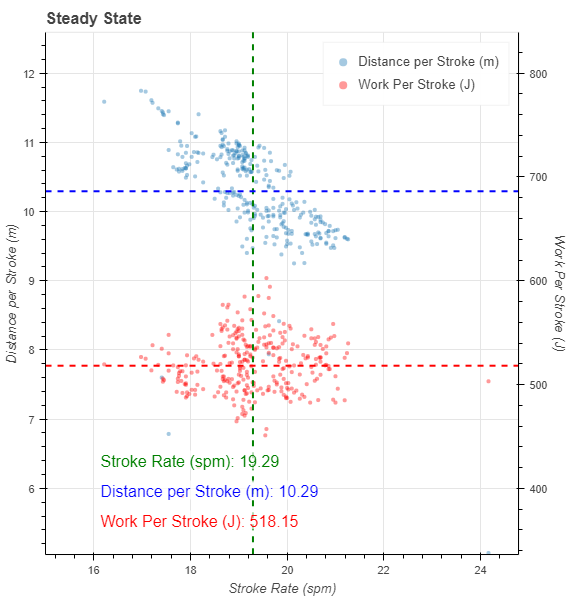 Now the same thing with the much hyped “wait” around the finish: 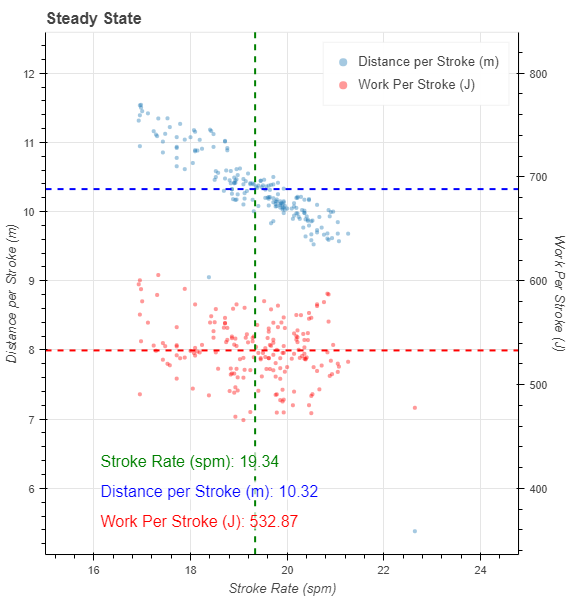 I did take care to select the same stretch of lake. It looks like I gained 3 centimeters per stroke at very comparable stroke rates, but I was also adding a bit more Work per Stroke. Looking at OTW Efficiency, which is a measure of the power/velocity efficiency, there was a slight increase from 60.5% to 61.5% when I was adding a slight pause at the finish.

In theory, 3cm per stroke would mean 6.6m over a typical 2000m race, but the problem is that I expect the difference to become smaller as stroke rate increases to above 30spm. I think it is good to measure these things and to try and quantify them. Of course, it’s also possible that I was already rowing pretty well (?) or I was not executing the “improved” stroke well enough. Also a third explanation comes to mind. Perhaps this hyped slowness at the start of the recovery works better in crew boats, and perhaps the mechanism isn’t about boat acceleration but more about being in sync. A fourth explanation is that the wind slightly changed. Definitely, wind has a big effect on these metrics. It was only a mild wind on Thursday, but I had to discard the middle stretch of this workout as it was rowed with a very light tail wind, improving the distance per stroke and OTW efficiency numbers.

I had a morning swim planned as Friday’s recovery cross training, but they are still reconstructing the 50m indoor pool and the outdoor pools have already restricted opening times (because the school vacations have ended). I also had some late conference calls (until 9pm on Friday evening) so there was no time for a light evening workout.

Also, I had started to develop a head cold. This changed my plans for the weekend. The original plan was to do a hard 8km in the single and then either a cross training or a row in the double on Sunday. I decided to go for a run on Saturday (causing muscle soreness because of not having done a running session in a long time) and go out in the double with Romana on Sunday. 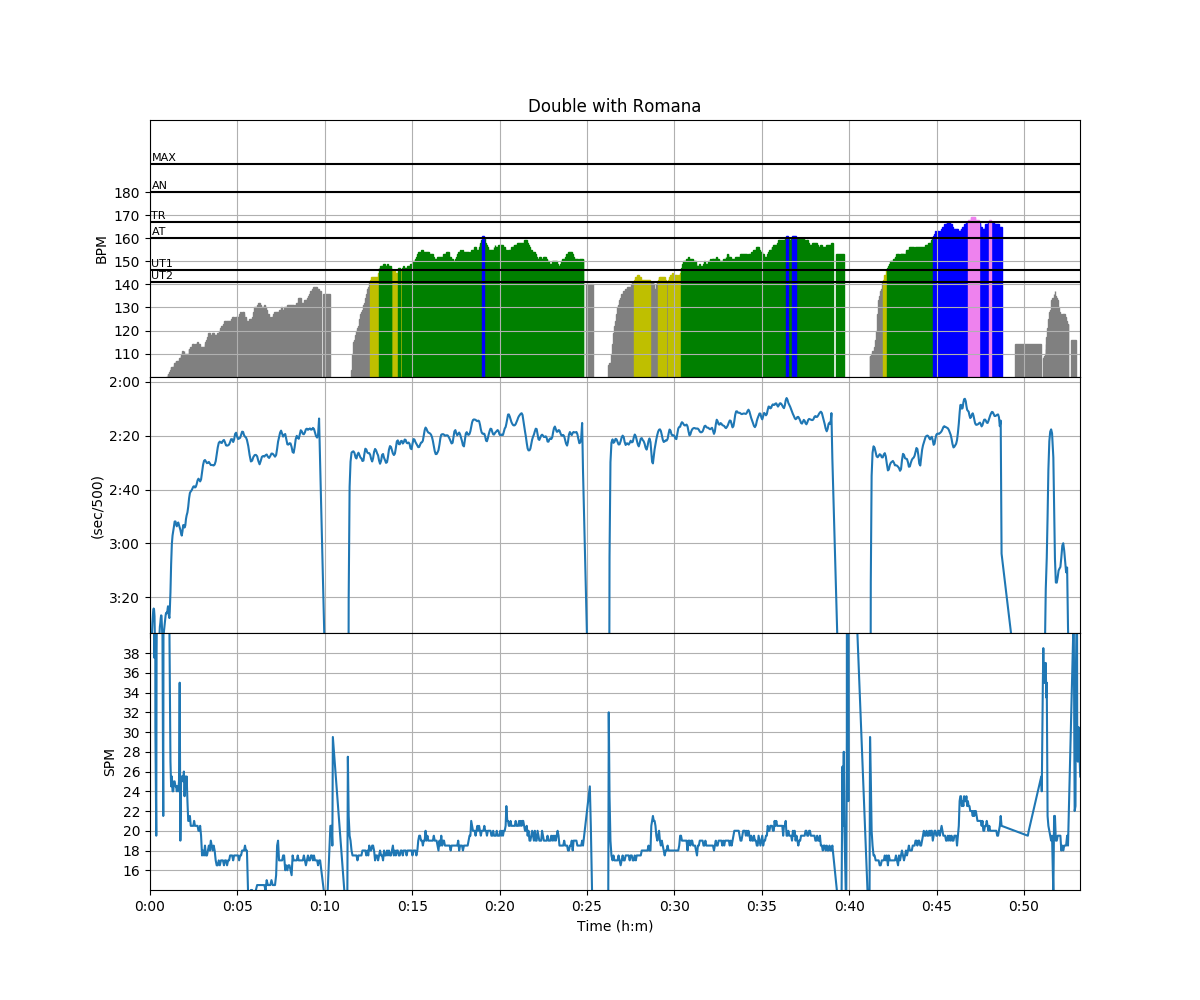 Sunday’s row was a great one. In the first part of the workout we focused on our synchronization around the tap down (again using the pauses that I discussed above). In the final part of the row, we added a slight acceleration in seat recovery speed just before the catch. We didn’t do quite enough strokes with this feature to really nail it, and the negative consequence was that we lost a bit of our lightness on the catch, but there were a few interesting strokes. I recorded everything with the Quiske pod and RowP app and here are the charts:

The green line represents the stretch were we focused on our catches. We were slower than when we weren’t! However, I have to point out that even though most of the workout was with mirror flat water, the wind increased strength during the workout, and this final stretch was rowed in head wind conditions.

You can see a very slight delay of the boat deceleration just before the catch when we were focusing on the catches (green line), but the effect is blurred because we were rowing in the double and there were many strokes where the timing wasn’t 100%. In the next chart, I try to pick out one stroke where I think we nailed it:

The blue line is the one with the delayed deceleration before the catch, which is the right most part of the chart. The green line is a similar stroke (at same stroke rate and on the same stretch of the lake) when we weren’t working on the catches. The wiggles at the end of the pull are not good. You typically see them when the synchronization of the tap down and hands away between bow and stroke is not good.

In that sense, the double is a great boat to do these measurements. In bigger boats, one guy being out of sync doesn’t do much to the boat acceleration or deceleration, and in a single you cannot be out of sync and you’re only looking at your individual strokes.

Thinking about boat acceleration charts, another thing should be noted. When rowing at a steady average boat speed, the area of the positive (acceleration) part and the area of the negative (deceleration) part should always be equal. So, if I change something that makes me row more efficient, the boat should speed up a bit. Because at higher boat speeds, drag increases, thus increasing the deceleration. What I am trying to point out is that looking at boat acceleration charts one has to be very careful about comparing two curves if they are taken at slightly different boat speeds. In this case, you can see that although we are managing to delay the big deceleration (checking) of the boat just before the catch, we are paying for that by slightly higher deceleration during the first part of the recovery.

And again, we’re trying to look at very subtle things here, where we always have to bear in mind that the effect of wind or stream may completely overwhelm any slight speed benefits.