A nice steady state row in the single. I am still having a head cold, but this was a nice sustainable effort. Pulled a bit harder in the second half of the workout as I was passing two guys from the Lodni Sporty rowing club in a double, then was not too much slower than our Men’s pair, and finally passing a Lodni Sporty guy in a single. I felt fast.

I also had to be at home on time to join my evening conference calls. 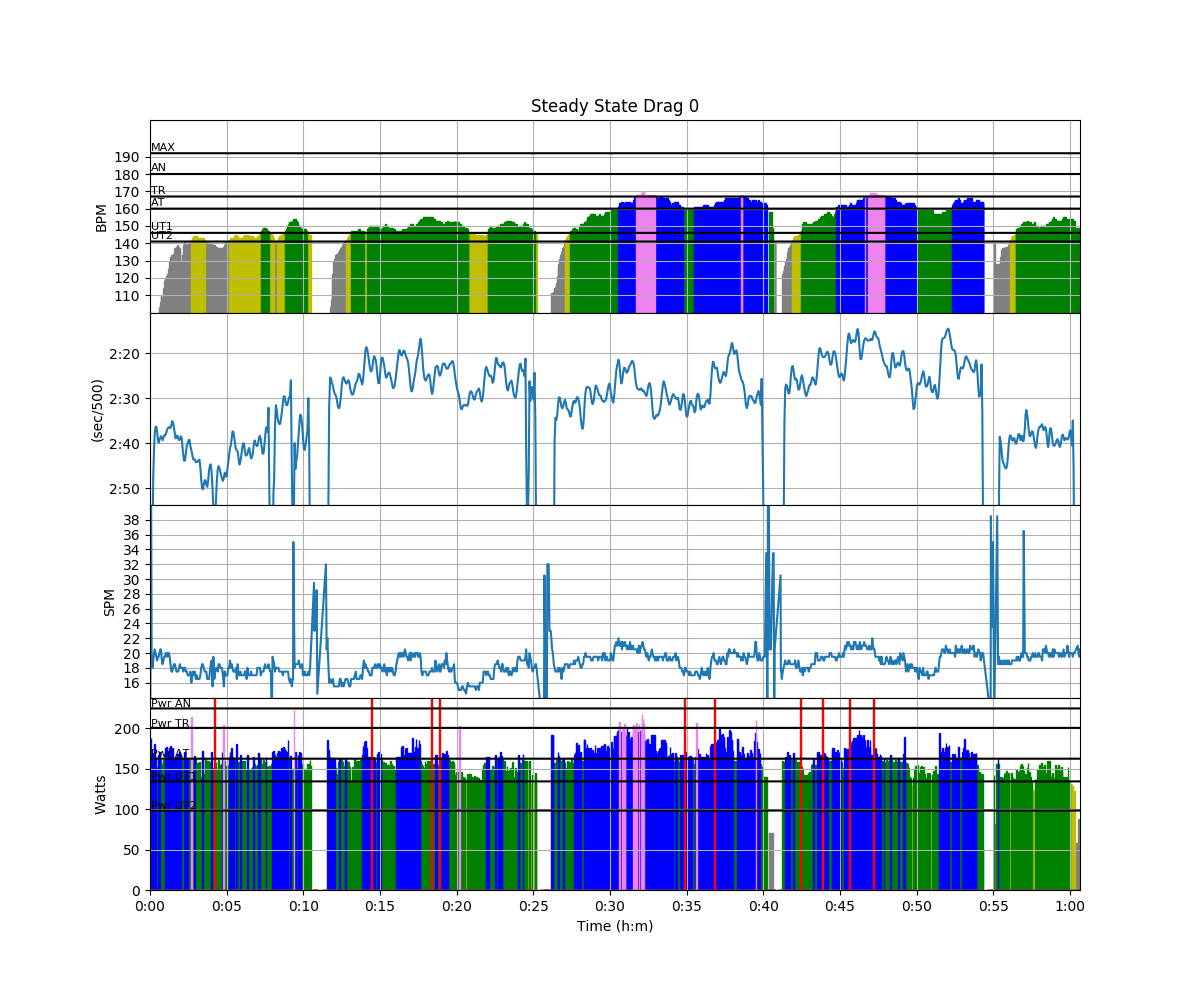 While Monday’s training was in the evening, Tuesday’s had to be first thing in the morning, because of travel. Not ideal when you are scheduled for a hard 7k.

I skipped the hard 8k, so I thought it would be a good compromise to row this one as a hard 7500m. Target power 211W.

In contrast with Monday’s row, this time I remembered to take the Quiske oar pod, but I forgot to put on the heart rate belt. Too much gear!

The first part of the 7.5k went pretty well although it surprised me that I had to work hard to get the stroke power above 211W. Normally, the power comes almost for free in the first half of the hard distances and I am focusing on not going off too hard. This time I had to watch and make sure I was at the target power. Perhaps because the target power was 10W higher? Or perhaps because I was still fighting a head cold?

The first turn was after about 3km. I set off fiercely, happy that I had bitten the first part off of this long hard row. Now I was rowing into a head wind and after about 1.5km I just stopped. I had been watching the total stroke angle on the RowP screen and saw my stroke shortening, which usually leads to shortening. I worked pretty hard to bring the number up again but the long strokes also seemed to sap the energy out of me pretty fast.

Demotivated by the large number of meters left. Unhappy because not being able to keep the stroke angle up? I don’t know. I paddled for the rest of the stretch, during which I formulated the plan to “save” this workout. I would row the final 2km at the original power, and argued to myself that it would still count as a decent threshold workout. 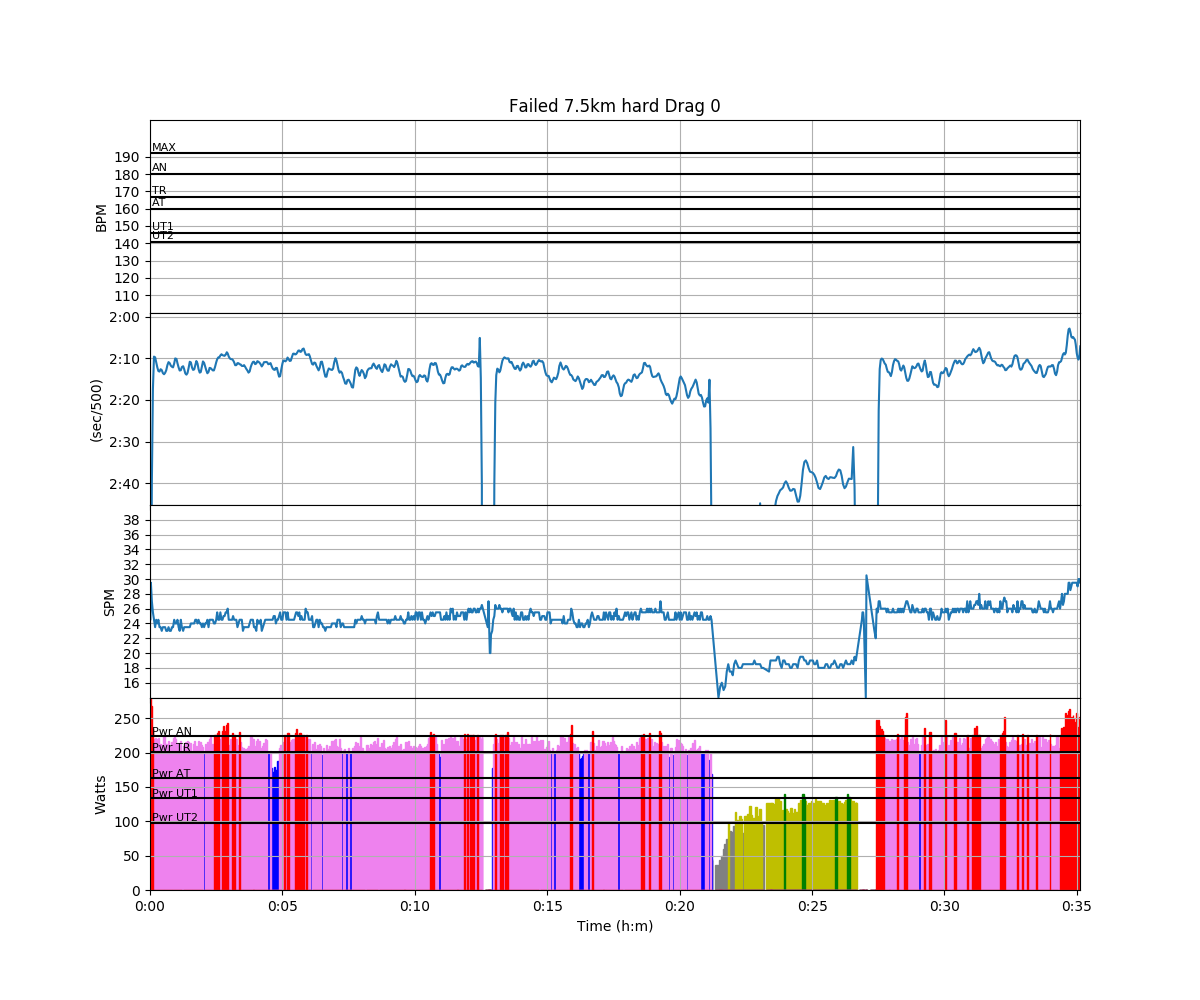 At least RowP told me that my stroke was pretty consistent:

During the recovery you can see a little acceleration bump which is typical for stroke rates 25spm and higher. Basically, the boat is floating the fastest during the middle part of the recovery. Here’s a comparison (of whole session averages) between head race pace and Monday’s steady state: 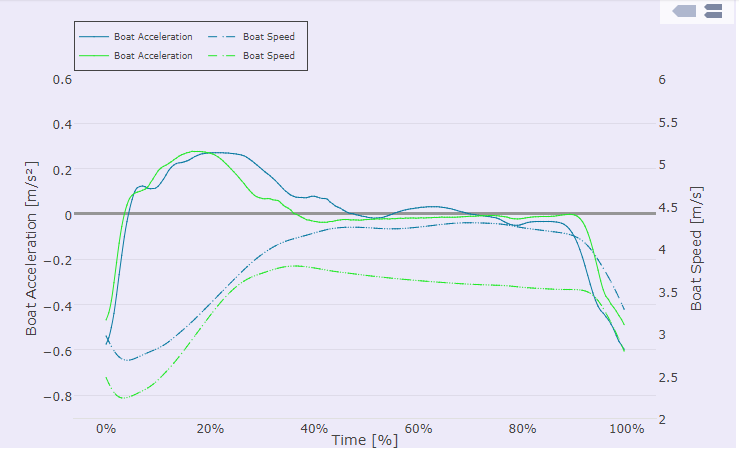 The x axis is a bit deceiving as it is a percentage of the stroke duration. A 25spm stroke is of course shorter in duration than a 20spm stroke. What I can see during the row is that on “good” strokes the deceleration troughs on both ends of the chart are relatively short in duration, while on “bad” strokes they are wide. Those are pretty good clues to watch technique during a row.

Here’s a comparison of my head race pieces so far: 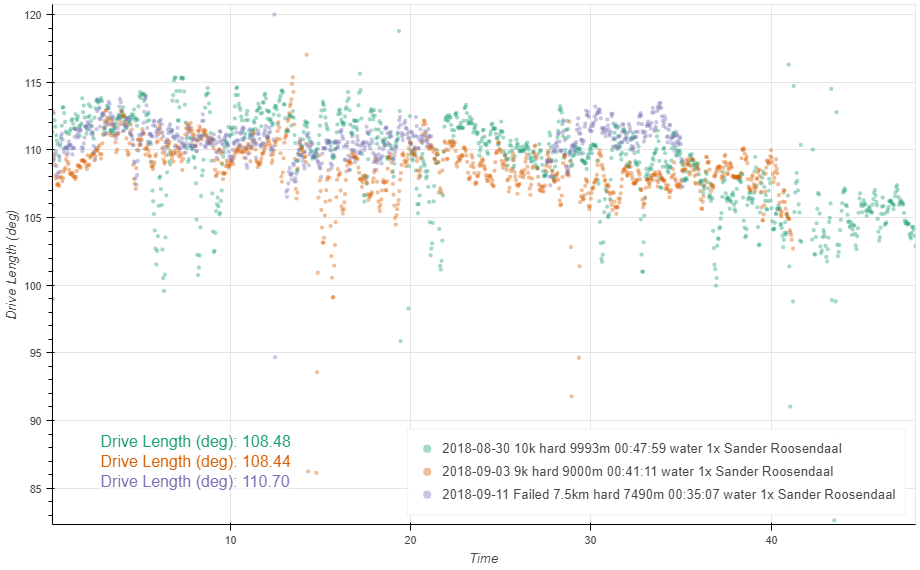 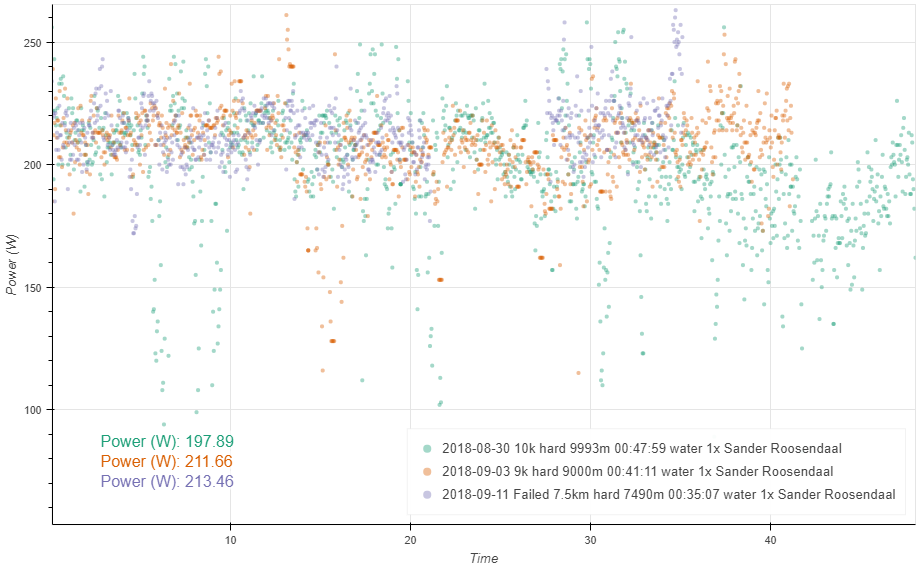 The averages are calculated over the “on” strokes only (discarding the middle 1.5km of today’s fail). So I am slightly longer, faster and slightly higher power. At least that’s comforting. Not happy about today’s handing down, but I have another opportunity coming Sunday, when I will row a 6k, which is my race distance.

Now I am heading to the airport and will spend the rest of the week in Sofia, Bulgaria, without an opportunity to go to Plovdiv to watch the worlds, unfortunately. My training plan has anticipated this trip, so I have running and weights scheduled.