On Monday, I unloaded the boats from the trailer and gave them a good wash.

On Tuesday, I drove to Prague, which took me more than three hours. I checked in to the hotel and then took the walk from Strahov to Kampa Island. Here’s a picture I took on this 30 minute downhill walk. 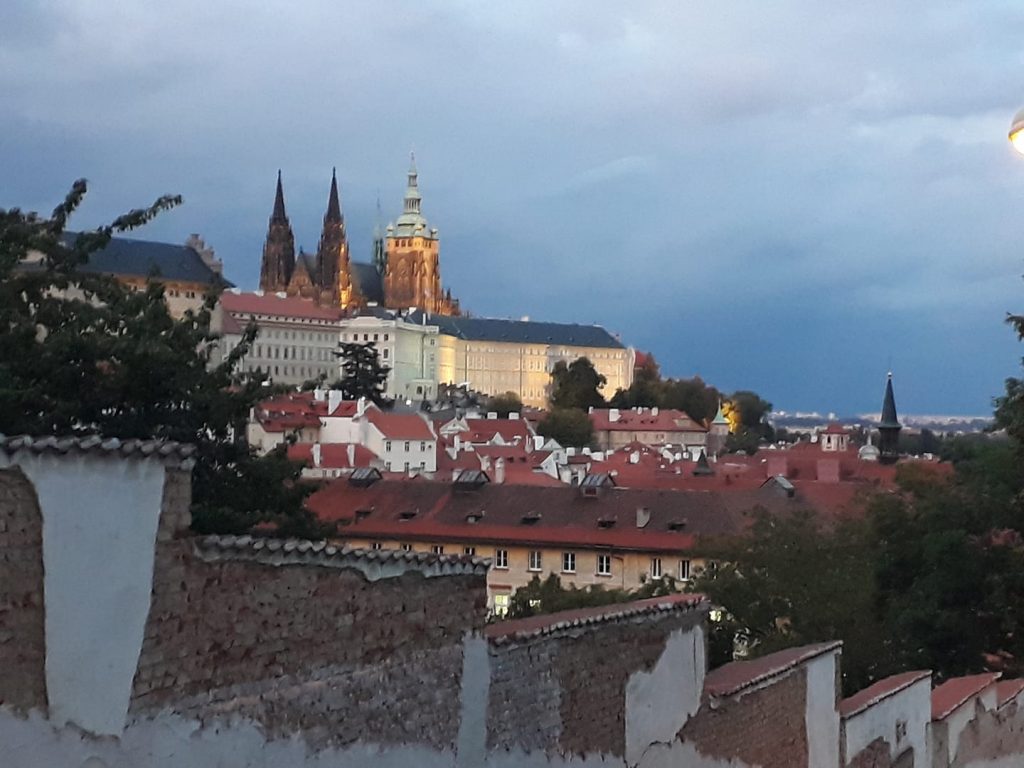 There was some rain coming from the west, looking by the clouds. I had a very nice dinner in the restaurant Kalina Kampa.

On Wednesday, I spent the entire day in Jenec, presenting at a Drone conference: 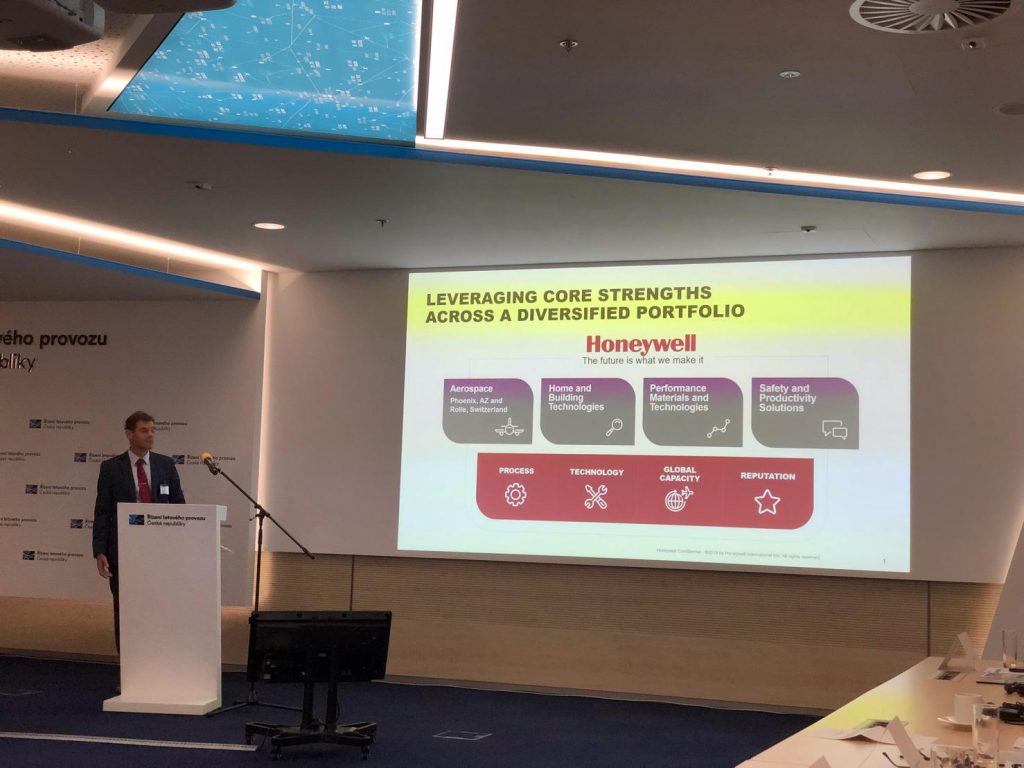 The picture shows me before lunch and before I destroyed my tie by spilling the contents of a profiterole all over it. Petroleum ether came to the rescue, luckily.

No training on Thursday. It was another day of presenting, this time at the home base. 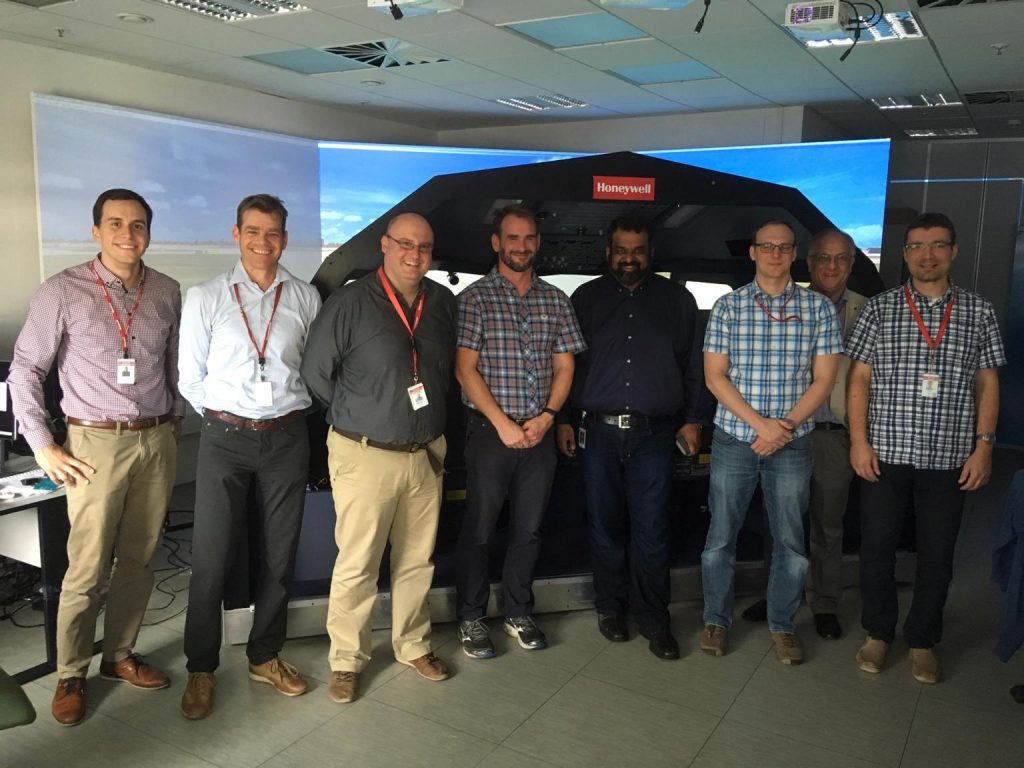 So after all the Linkedin-fame, Friday was a day for a workout.

To ease into training again.

My strength trainer totally got the point. An easy session, not too hard. You bet. I don’t know what she made me do but I felt it for two days afterwards. Just some deadlifts, squats, bench presses, cable rows, and other exercise.

On Saturday I did the first row after WRMR. A steady state in the single. I rowed up to beyond the castle and back: 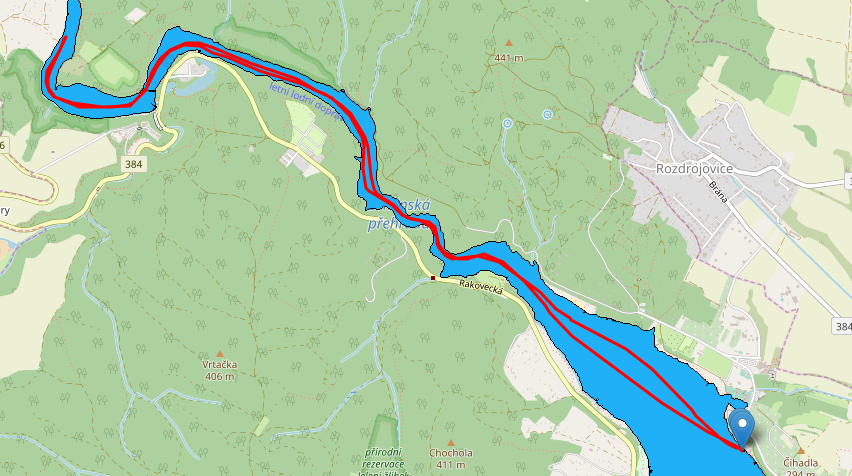 It was a gorgeous row. The only problem was that I had forgotten my SpeedCoach at home. This always happens after a regatta. I have my rowing kit in the wrong bag, or I have to charge it, and I forget to put it in my standard rowing bag. Well, at least I had heart rate data from the Polar arm belt, and stroke rate and pace data from the Garmin watch.

Today, the weather was gorgeous. I had originally planned to go swimming, but with the sunshine and the nice autumn temperatures (18 to 22 degrees and sunny) I decided that a bike ride would be more like it.

I rode up to Vranov and back through mostly forest trails: 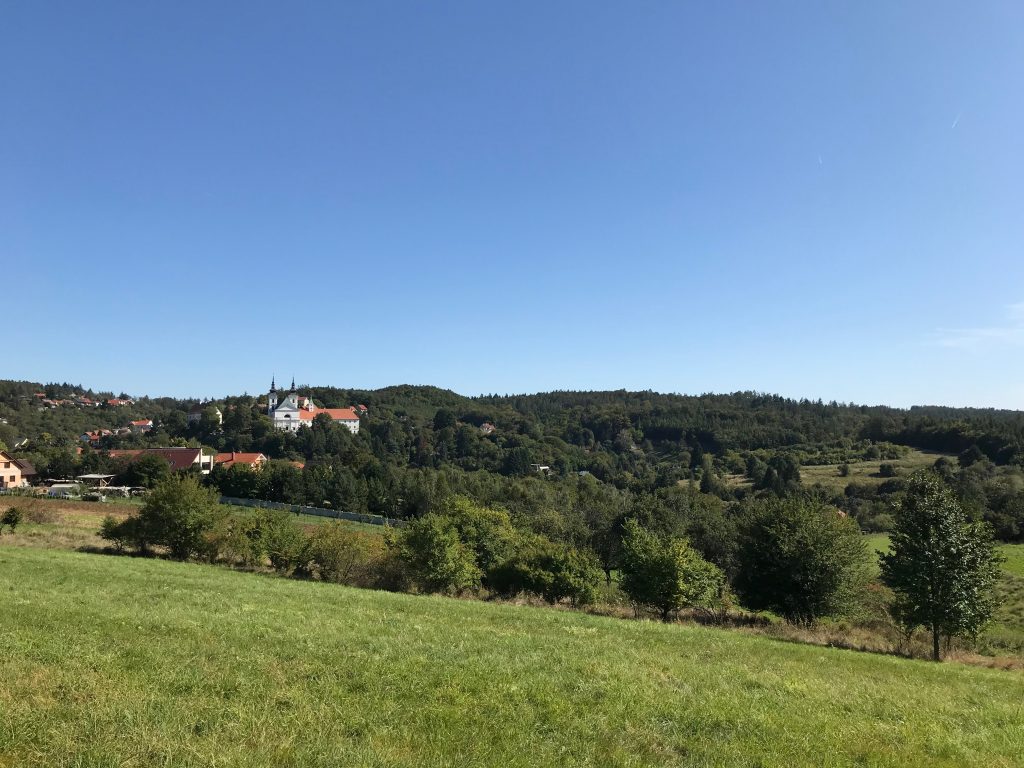 Here’s an example of a nice trail: 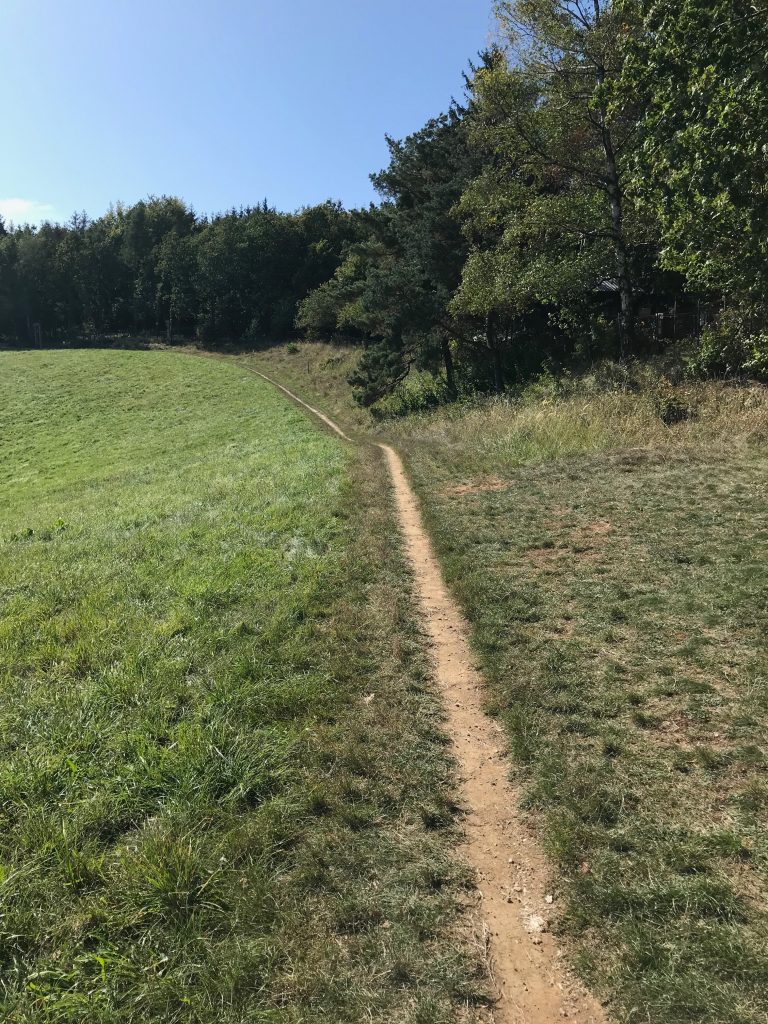 Going down through the forest, I didn’t take pictures. Actually, some places were so steep that I got off my bike and hiked.

I made a stop in the village of Lelekovice and a beer in a pub garden. It was nice to sit in the sun, listen to the silence, and gaze at the forest.

On Monday, we just loaded the boats. On Tuesday, we drove to lake Velence in Hungary, which is just a 3.5 hour drive from Brno. Boat trailer density increased steadily on the highway as we got closer to our destination. At Velence, our friends from Ostrava had reserved some nice boat rack space in the small boat peninsula. Our boats are on rack C16 on this photo: 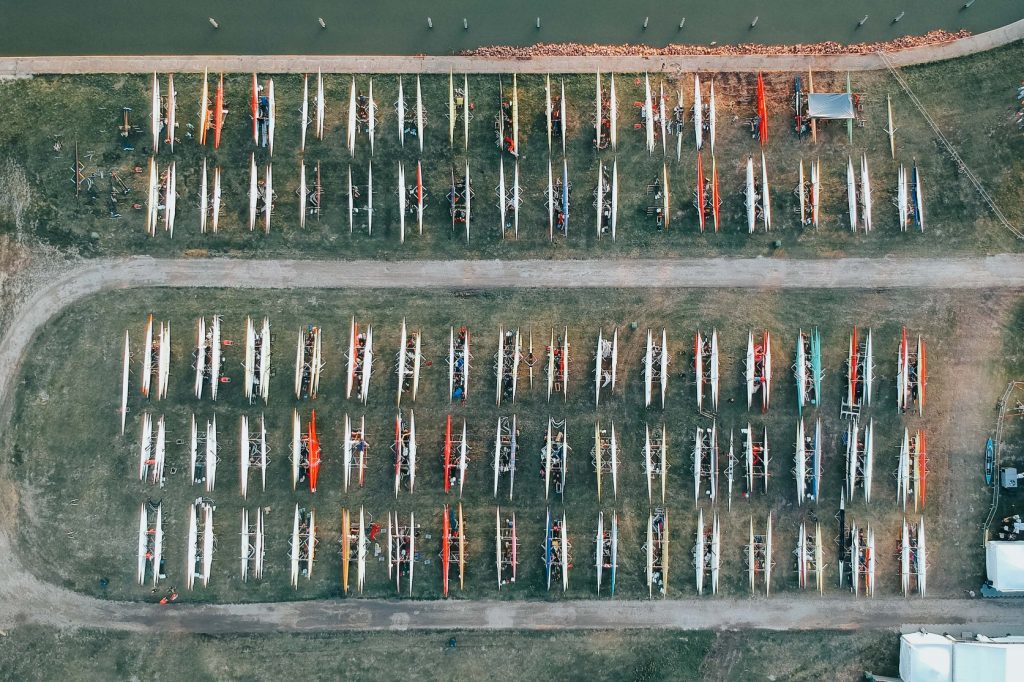 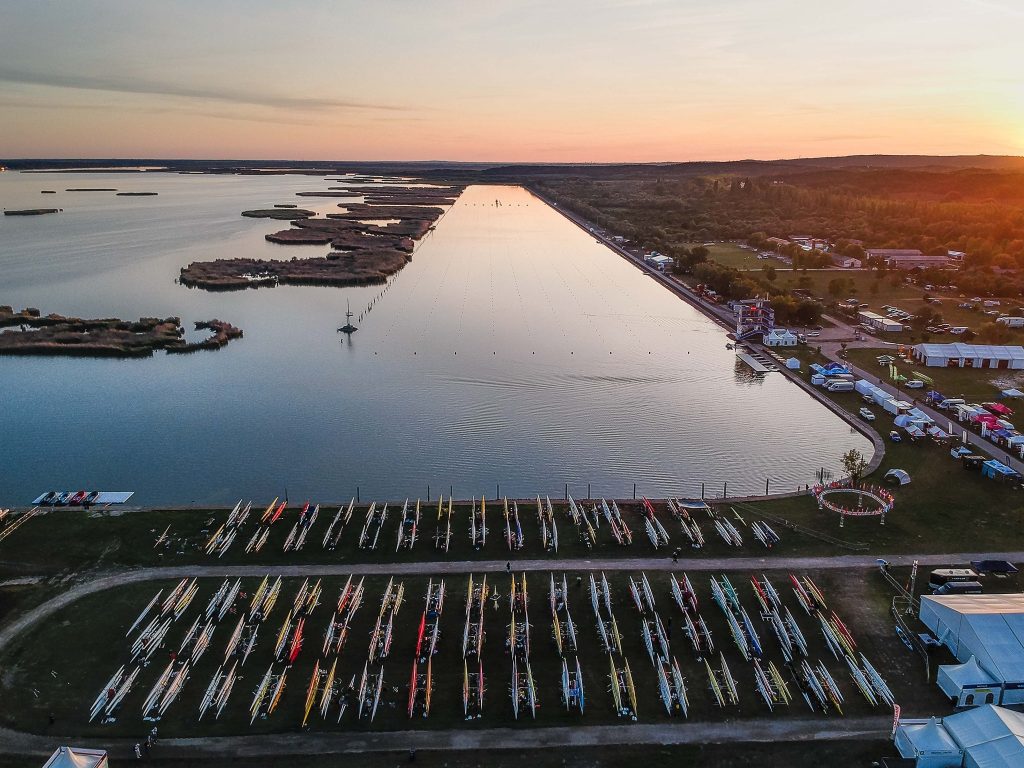 There are many more boats to the right of this. After preparing our boats, Romana and I took our double for a spin: 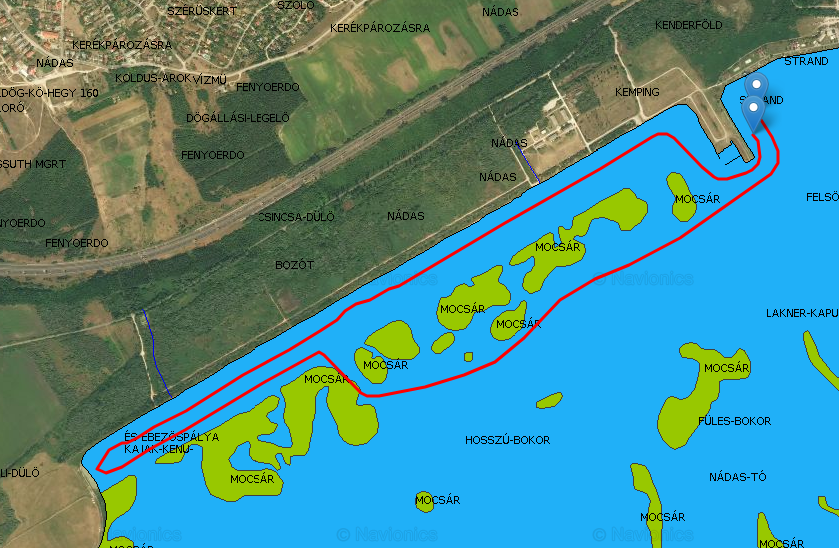 On Wednesday morning, I managed a short training in the single: 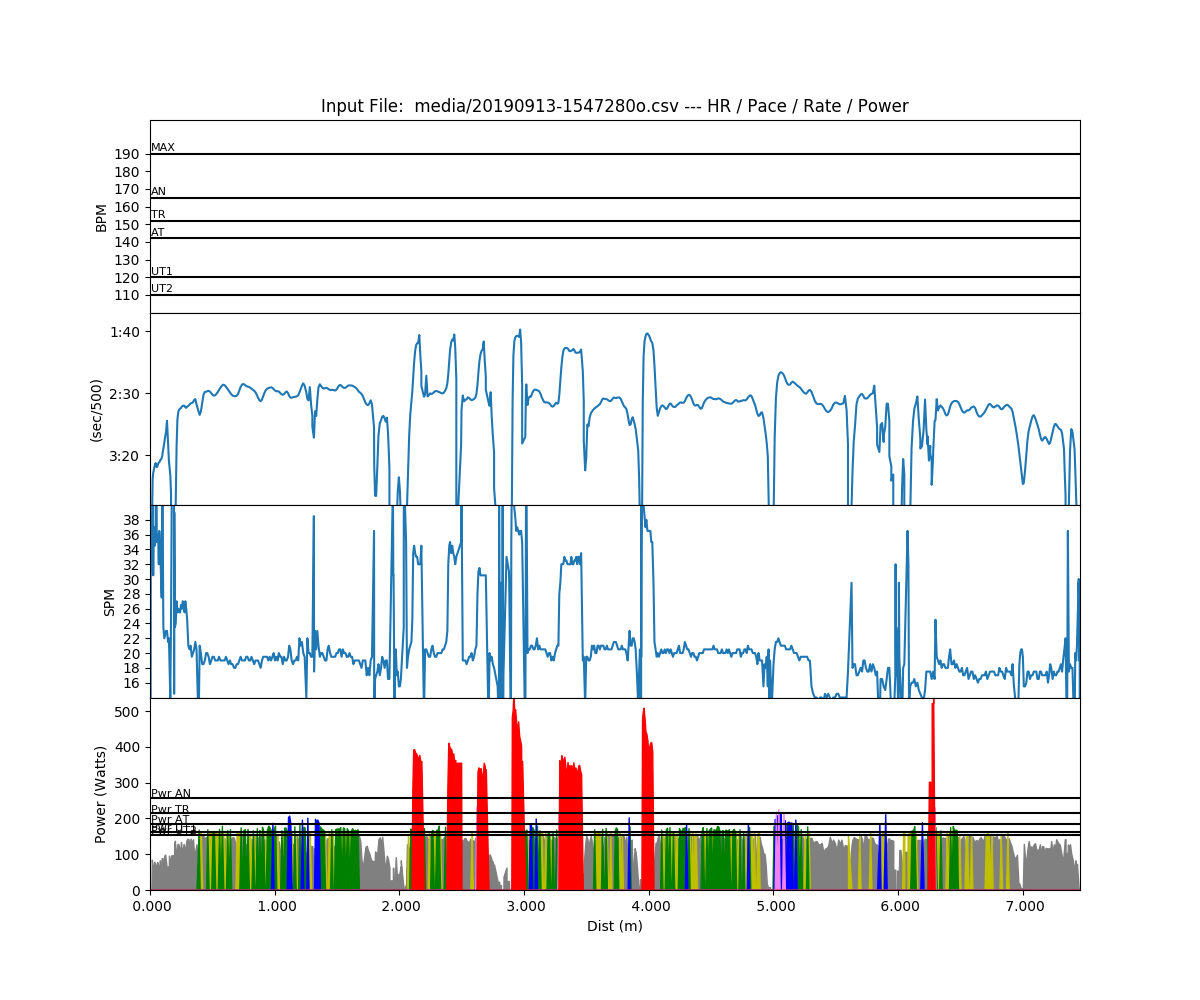 On Thursday, I had no races. Romana and her crew had a fantastic victory in the Women’s D coxless pair: 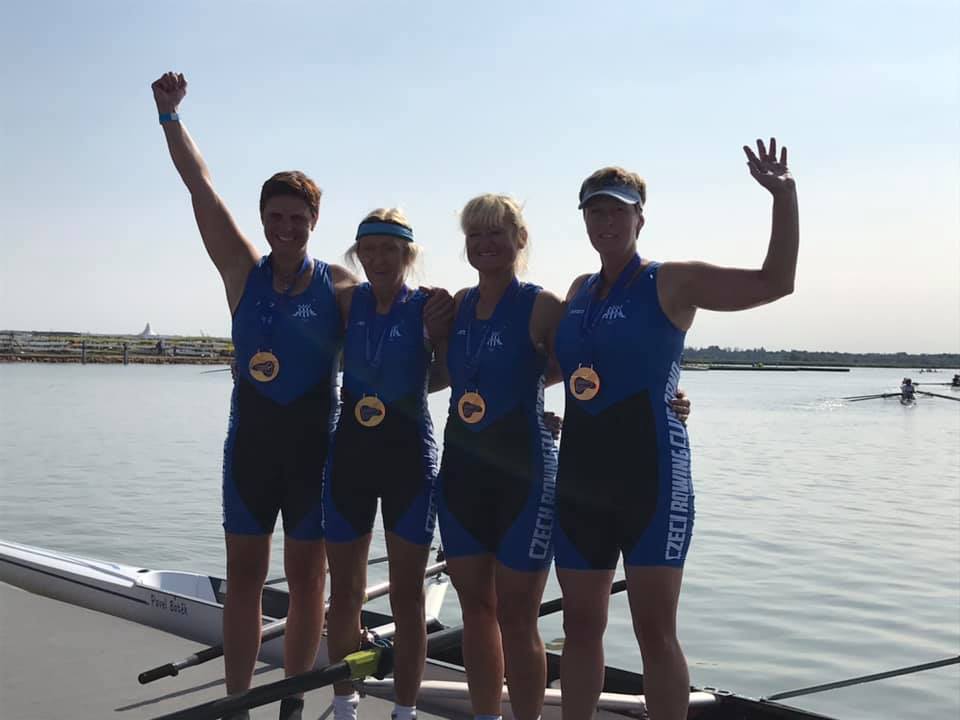 When I was welcoming them back to the dock after the race, one of the ladies (the second from the left on the picture) was selected for doping test. I went with her, as she doesn’t spea kany other languages than Czech. In the end the whole exercise took more than three hours.

On Friday, it was time for me to race.

I was very nervous of course, but as always the nerves disappear after the first stroke. 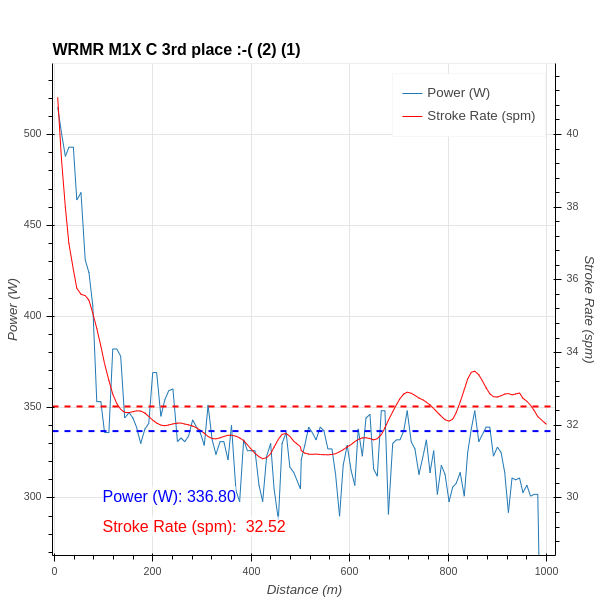 I wanted to row around 330 to 350W for this row. Not everything went as planned. I came out of the start pretty well, but there were two guys who just rowed away from me. I was the leader of the rest. Around the 500m mark the others started to fall behind and I ended up rowing in no-man’s land, too far from the leaders, but too far ahead of the rest. Third place. A slow time of 3:59. All times were slow at this lake.

On Saturday, Kazi and I rowed a pretty good race. Again, somebody was depressingly fast out of the start and way ahead of us. At the start we were fifth, but we quickly passed some boats and then started to catch up with the second placed boat. We were third in a great time of 3:23, which would have one a few of the other heats.

The first race on Sunday morning was the Mixed 8+. 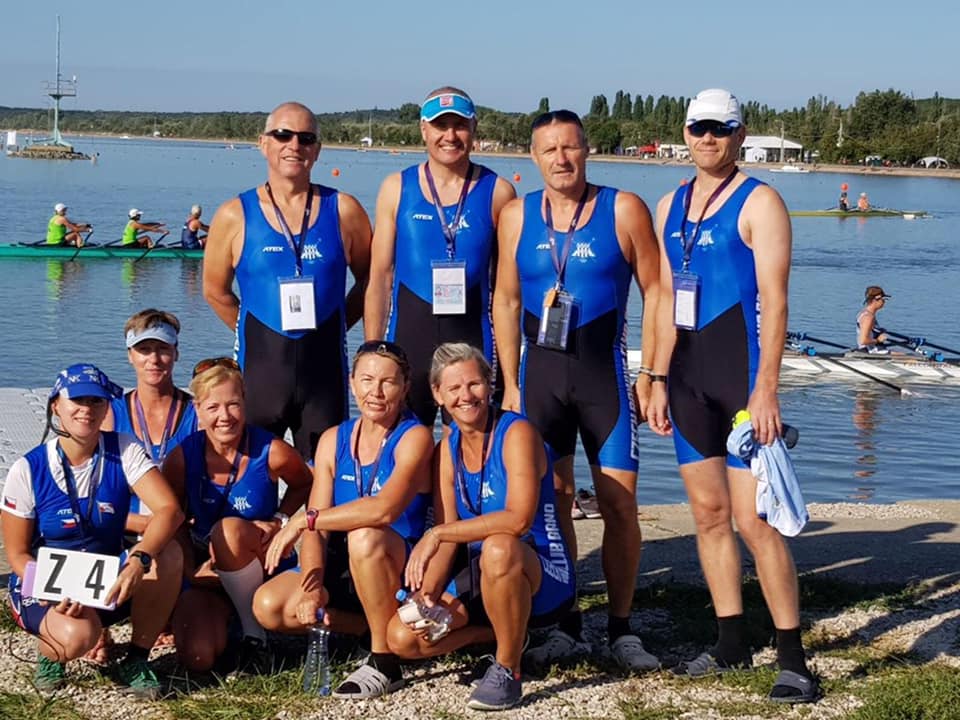 I really enjoyed racing the eight. It’s nice to sit in a big boat, and even great to sit on 5 seat. You just place your blade and pull, that’s it. We were up against Hodonin, 60 km from Brno, so rowing up to the start we joked with them that we could have done that race at home in Brno or Hodonin.

We were up against a International crew featuring some impressively muscular men. Still, we were one of the few boats being able to keep the pace with them. In the end we were third, 5 seconds behind the winners and 0.05 seconds behind Cambridge. Not bad, given that one of our men, Cenek, wasn’t pulling for the last 300 meters. This being just a spontaneous mixed eight, we had difficulty finding the fourth guy. In the end we got Cenek, who trains regularly, but seldom rows above 18 strokes per minute. Doing 35 and higher for more than three minutes, in combination with him being very nervous and having eaten a bit too much at the breakfast buffet, it killed him after 2 minutes and a bit. We paddled back to the dock and had a medic look at him. Everything was fine. Cenek took a nap under a tree and an hour later he was OK. 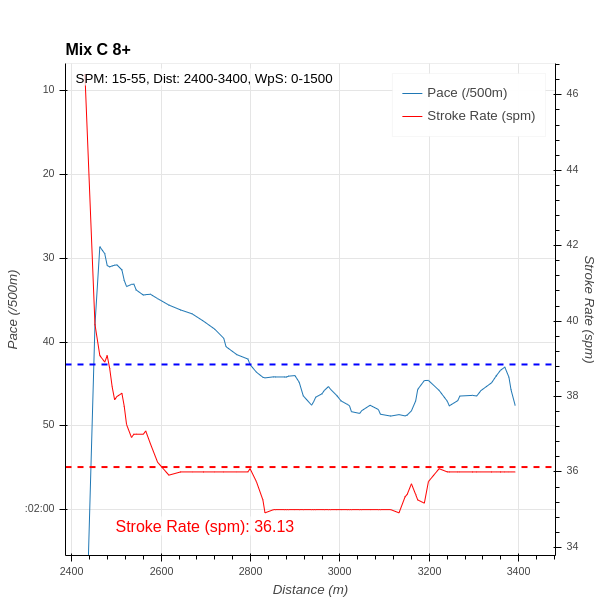 The final race of this great regatta was the mixed 2x. 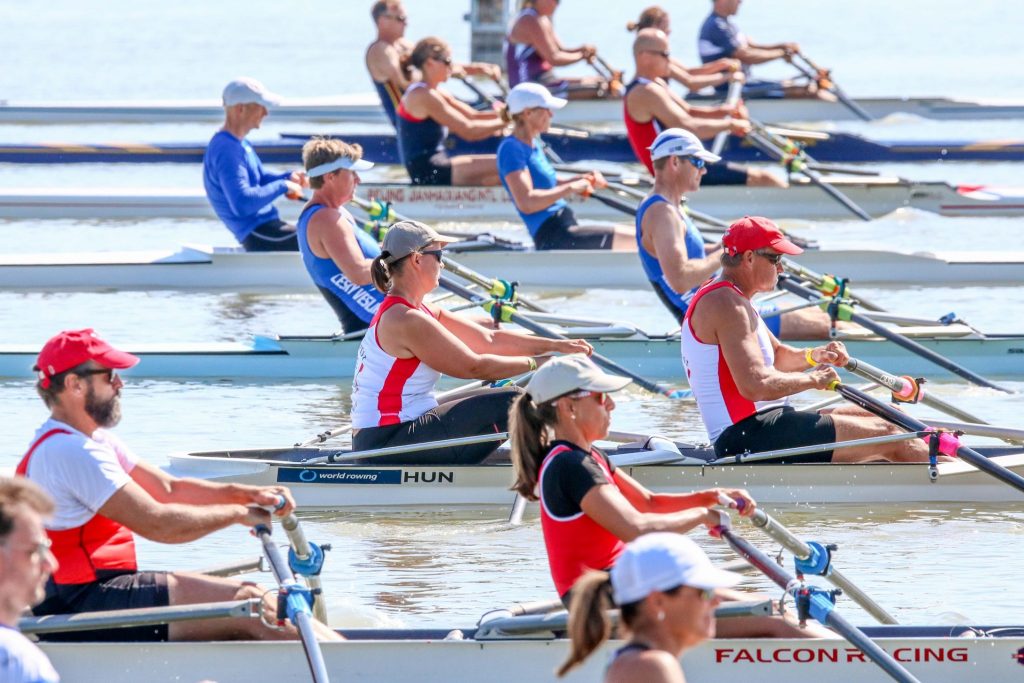 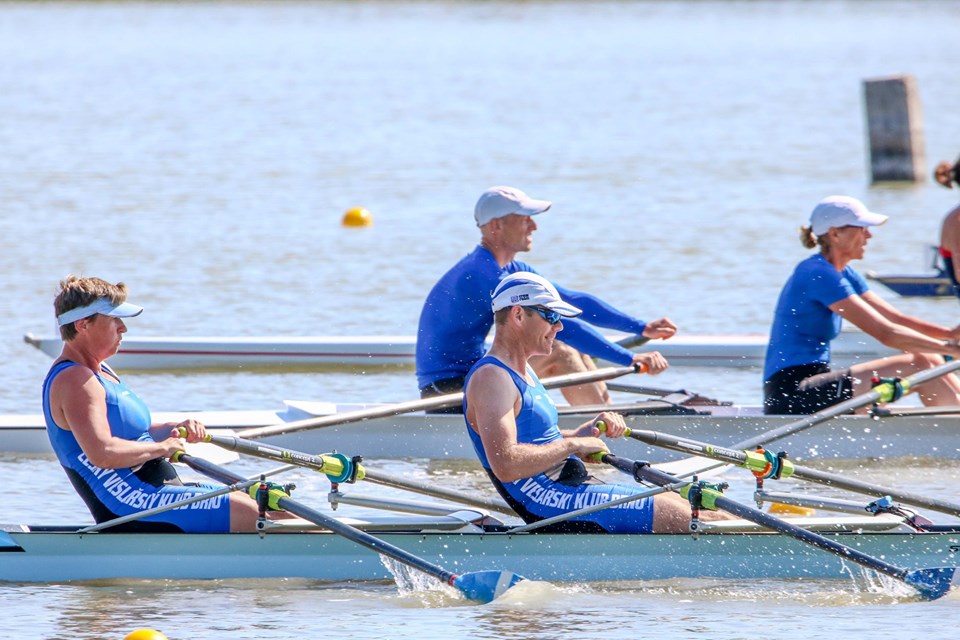 This was our best race of this season. We had a great start and we raced some very good opponents, so again we ended up rowing in the middle of the pack. At every point in the race we were racing some other boat, and in the end we were able to race up pretty high and come in fourth place after a great fight for third place. 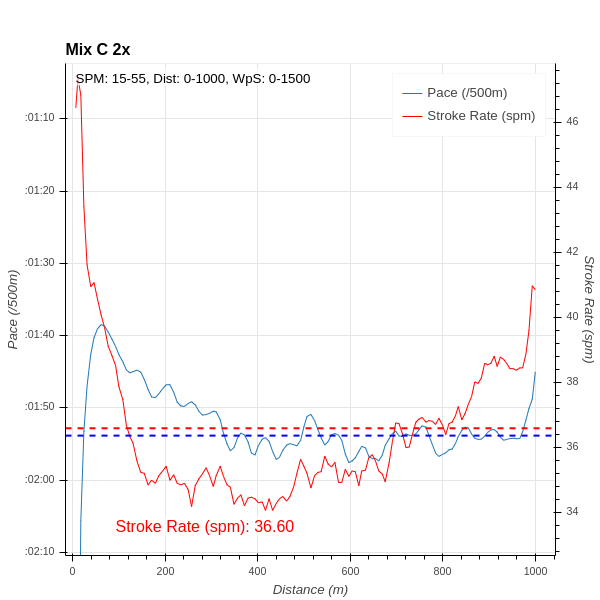 After that it was time to load all the boats on the trailer, have a quick lunch and drive home. We arrived home at 7pm, after a great regatta.

Romana had some great races (second place in two quads). The weather was great. We slept in a great hotel with a fantastic restaurant, had some good food and good wine. We met friends, chatted about rowing and other things.