The End of March

I wanted to do this week’s weights session during my lunch hour, but I found out I had left my training shorts at home. So, instead, I spent an hour on the erg in the evening. 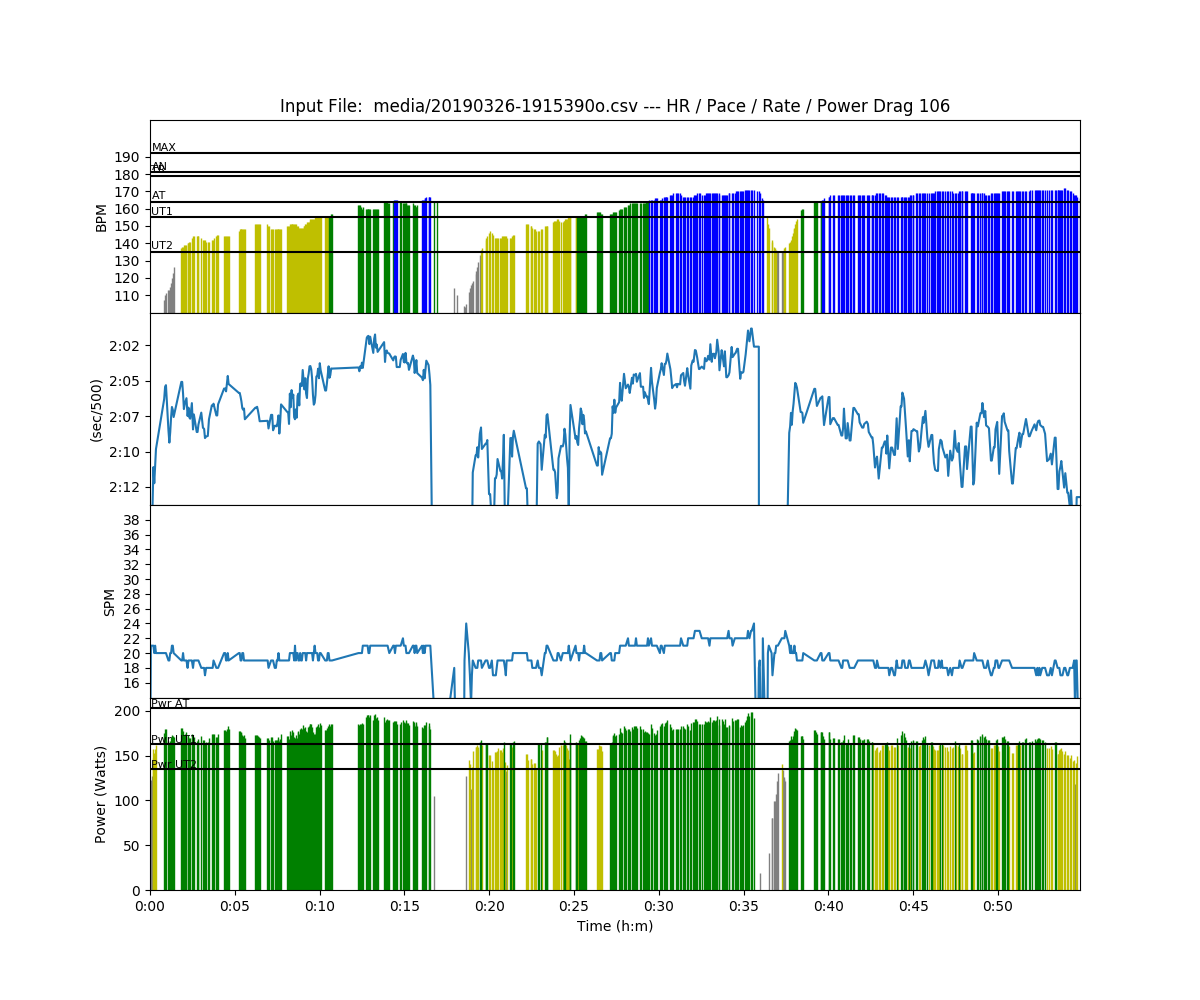 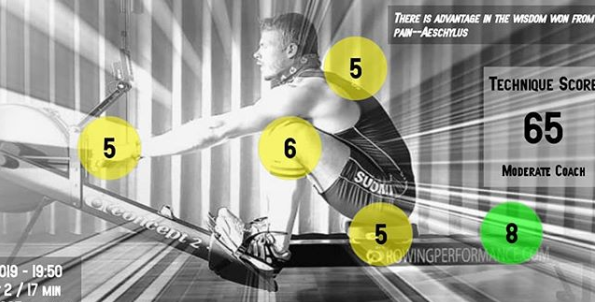 Here are my own charts on drive rhythm and drive speed, adding power and stroke rate for reference:

So I rowed three intervals and used Quiske in the first and last ones. The virtual coach liked the last interval much more than the first one. What are the differences?

More interesting is to look at seat speed (dashed line) and handle speed (solid line). The blue line is the session average, green is in the beginning of the session and red is near the end. Here are my observations:

All in all a whole lot of technique things to check on. 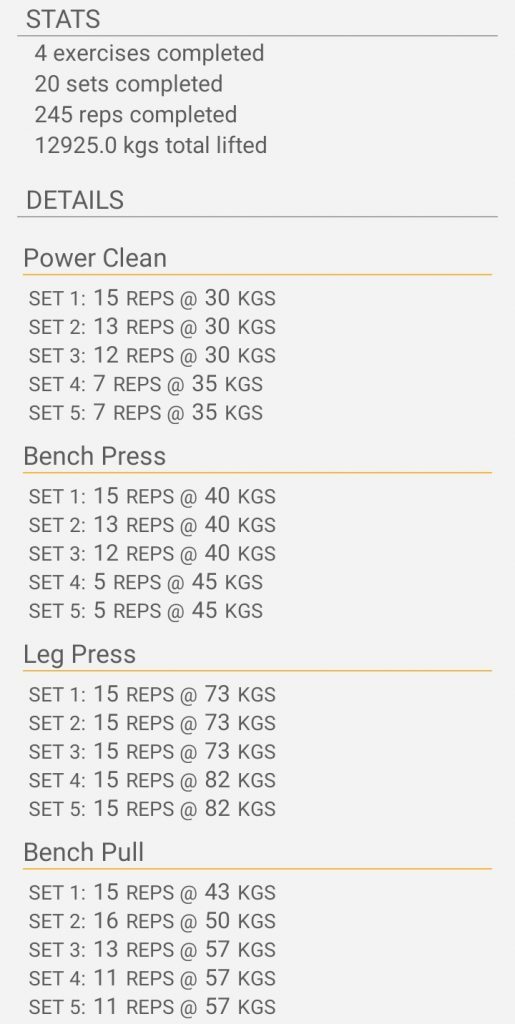 A brutal weights workout, well at least for my tiny muscles. After months of body weights and cable machine exercises, I am starting to be ready for the “big” weight lifting exercises.

I did a 2k warming up on one of the horribly maintained Concept2 ergometers, the one with the working battery. In true gym style I have to set the slider to 10, but that is only to get a reasonable drag factor (120).

The sets shown on the left are the “work” sets. For each of the workouts, I did a few “warming up” sets, where I gradually increased the weights. The prescribed “work” was 3 sets at 60% of 1 Repetition Maximum (1RM) and 2 sets at 70%. I had to guess my 1RM maximum, because I have never done the testing.

Each set was to be done to exhaustion, but as I had no chaperone, I stopped one or two reps early, just to make sure the weights wouldn’t collapse on me.

It doesn’t get in the way.  You prepare a routine with all the exercises you want to do, then when you do a set, you quickly enter the weight and number of reps, which is a one thumb operation. Also adding a new set is a one click. Even though the app looks very simple, you can basically operate it with one finger, and it seems to be very well thought out. The next screen I needed was always just one click away.

I am not very sympathetic to people playing with their phones in the gym. When you’re working out, you’re working out. OK to use a phone to record your workout, but I see people writing emails, making phone calls, texting, apping, facebooking, and what not, all the while occupying workout stations.

Once you have done a few sets, the app also estimates your 1RM maximum, which is probably slightly underestimated in my case, for the reasons mentioned above, but it is a very cool feature anyway: It gives you a little table of weights for 1 rep, 5 reps, 10 reps, 15 reps etc.

It’s also syncing to the cloud so you can use the app on different devices. And finally, it charts your progress. I think I am going to be finding a lot of motivation from this extremely simple app. It shows that providing just a little extra functionality on top of a paper notebook can already be very valuable.

So Bench Pull, Leg Press, Bench Press, and Power Clean, in that order. Power Clean is really the exercise that I am the weakest on.

For next week, I have hired a weight lifting pro for one hour, to help me with form.

I had a late ending work day, so I went out in the morning. 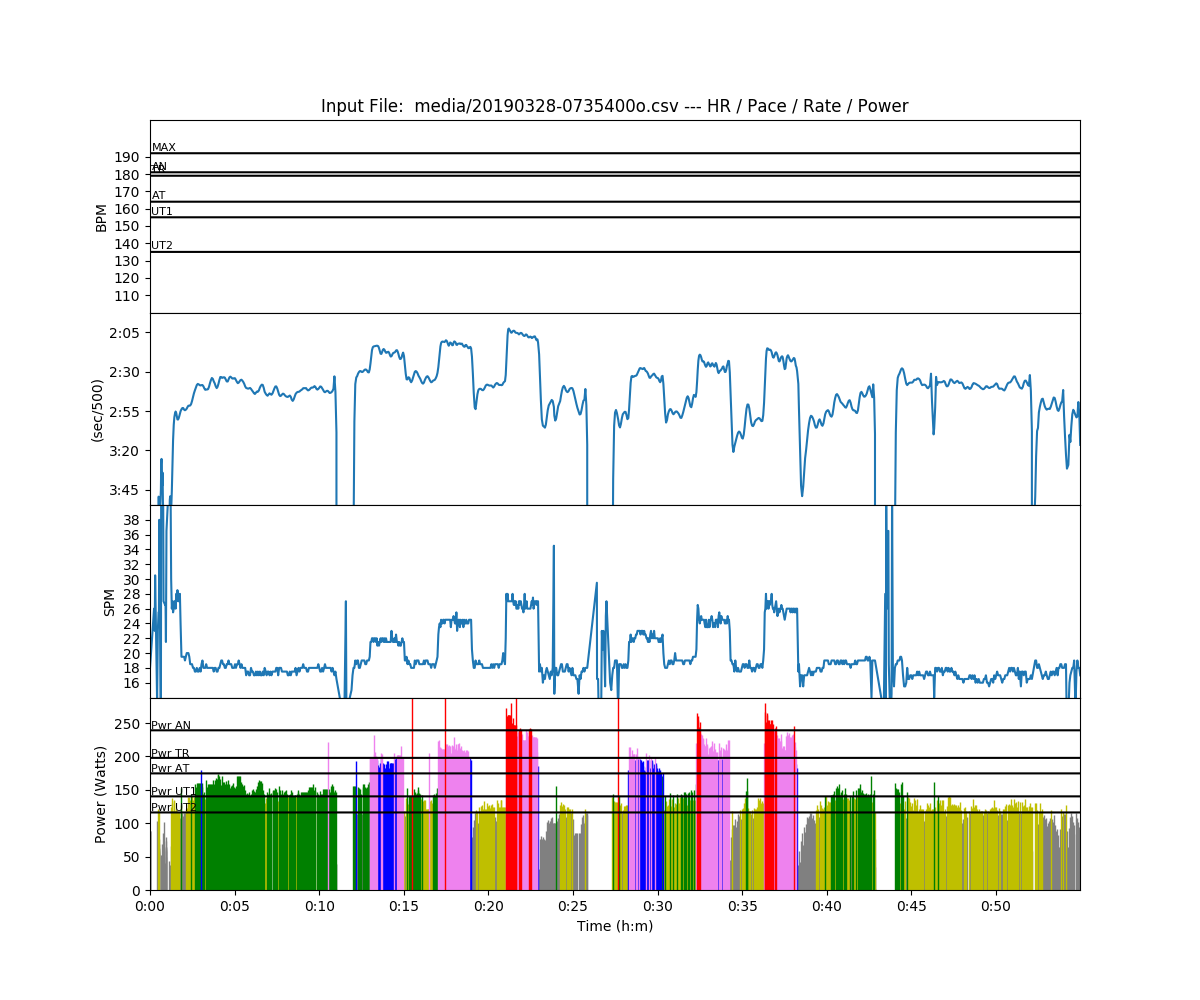 I forgot to wear my heart rate band and when I discovered that on the dock, I was too lazy (and time pressed) to go back to my locker. This was supposed to be a steady state row anyway, so I wasn’t expecting any heart rate data of interest, and as I have a power meter, I can use power to measure training load.

I actually did a few 2 minute intervals at fixed stroke rates (22, 24, 26), with tailwind, and with headwind. I did this with the plan to run the same test on a boat I was going to test on Friday. I will defer the Quiske analysis to the end of this post.

Up early for the drive to the Argonauten rowing club in Vienna. My own sculls on the roof rack. It’s just a 90 minutes drive, so I left 5:15 to be in time for a 7AM training. The single didn’t have a C2 holder, and it had one of those modern reverse wing riggers, so I didn’t have a place to put the NK SpeedCoach.

The chart you see is a miracle of data fusion. I recorded heart rate on the Polar OH1 arm, position and speed using the Garmin watch, and I got stroke rate and stroke length from the Quiske app (using their CSV export to Rowsandall). So in the chart, each window is from a different device. As you can see, I just did a short workout on the Alte Donau. 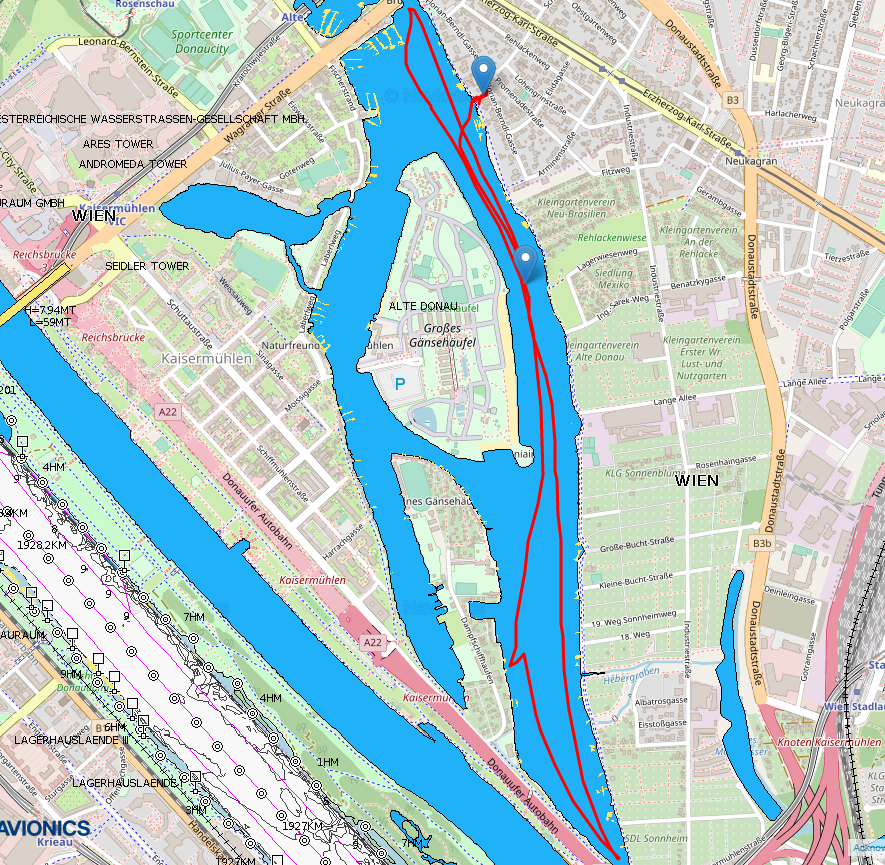 The little backtracking bit of my trajectory is when I saw some Vienna Masters rowers and friends (Andreas Kral and Marko Milodanovic) park their double (called “Kralovic”) at the Donaubund dock, so I shouted “Good Morning” and then reversed to their dock for a little chat.  A very pleasant surprise. I have to consider coming to their International Regatta, but there are so few free weekends this coming season …

So how did the comparison work out?

In the Quiske boat acceleration charts above, red and cyan are Thursday (my boat) and green and blue are Friday (test boat). Here is the oar angle speed chart (same color coding):

And what shocking conclusions do I draw from all those beautiful curves? The following:

Is that all? Yes.

Well, almost. There is also a little bump at the start of the oar angle curve. I have circled it in red here in the 26spm chart:

That is me being to cramped at the catch. I need to get rid of that bump.

And now that I look in detail again, I notice that I am cleaner on the tap down today than yesterday. Not sure if that is the boat or just me trying to row cleaner because of a coach on the bank.

And then there is a final thing. Looks like the last part of the recovery is a little different. Hm, have to think more about this.

Sunday – Sparring with the boys A sunny weekend / 4x1500m OTW