A workout that doesn’t look so hard on paper, but after I’d done it I was sure my arms would fall off.

30 minutes of running/cycling. I did both, in the fitness center close to the office.

Pretty explosive and pretty heavy on shoulders. It was fun.

I was able to leave work early and arrived at the rowing club at 4pm. I decided to take the single out. It was “nice” weather. A light rain, but it wasn’t too windy. Steady state and mainly technique focus. I used the effective length metric on the NK SpeedCoach/Empower in combination with the Work per Stroke. Returning to the water after a winter of erging, my strokes are a bit too heavy around the catch. Need to lengthen up, lighten up and still get those Watts in the stroke. 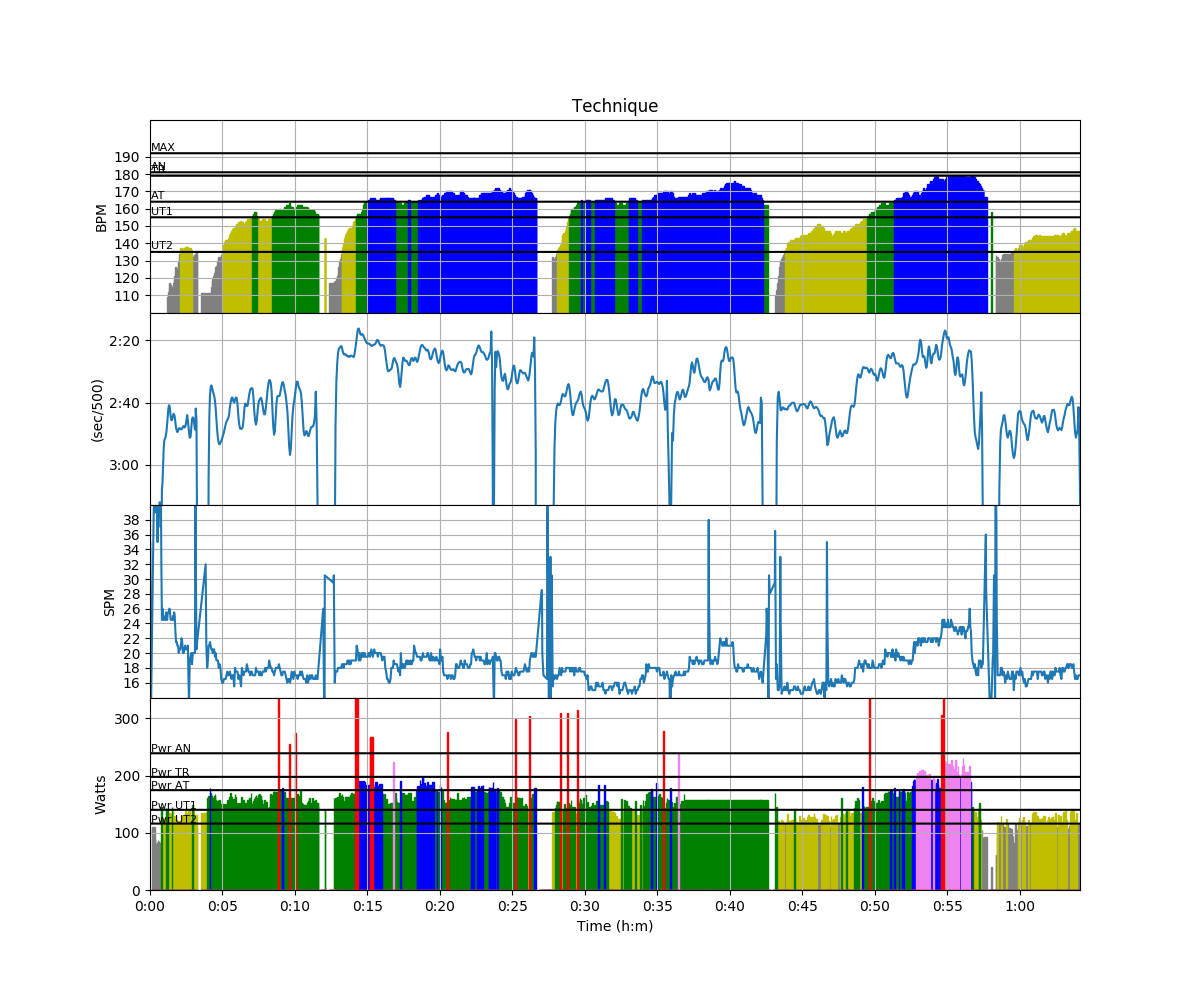 You can see in the section between 0:42 and 0:56 how it all came together and I cradually increased the stroke rate to 24spm. Unfortunately, the Empower Oarlock disconnected after 36 minutes and I had to pair it again with the SpeedCoach. After the training, I downloaded and installed new SpeedCoach firmware.

The forecast was that the wind would be strong during the night and slow down in the morning, but when I arrived at the club, it was not a calm lake. For a moment, I considered using the LiteBoat coastal single, but in the end I wanted to get more practice in in my own single. I figured that the water would be calmer on the opposite shore and in the canyon.

Here’s how I rowed (short sliding) the crossing of the lake to find calmer water:

The training was 3x2km at 24 spm. As I rowed up into the canyon, I decided to row two intervals into the headwind, and two intervals with tailwind on the way back. It seemed a pity not to do 4 2km intervals, and it was perfectly doable. The tailwind intervals were very enjoyable, and I was happy to see that I could rate up to 27spm in those bits without really getting tired.

Well, I did get tired, but I was having so much fun that I didn’t notice. After lunch, I had to do groceries, and at one point, all I really wanted was to find a quiet part of the store, lie down and rest a bit. 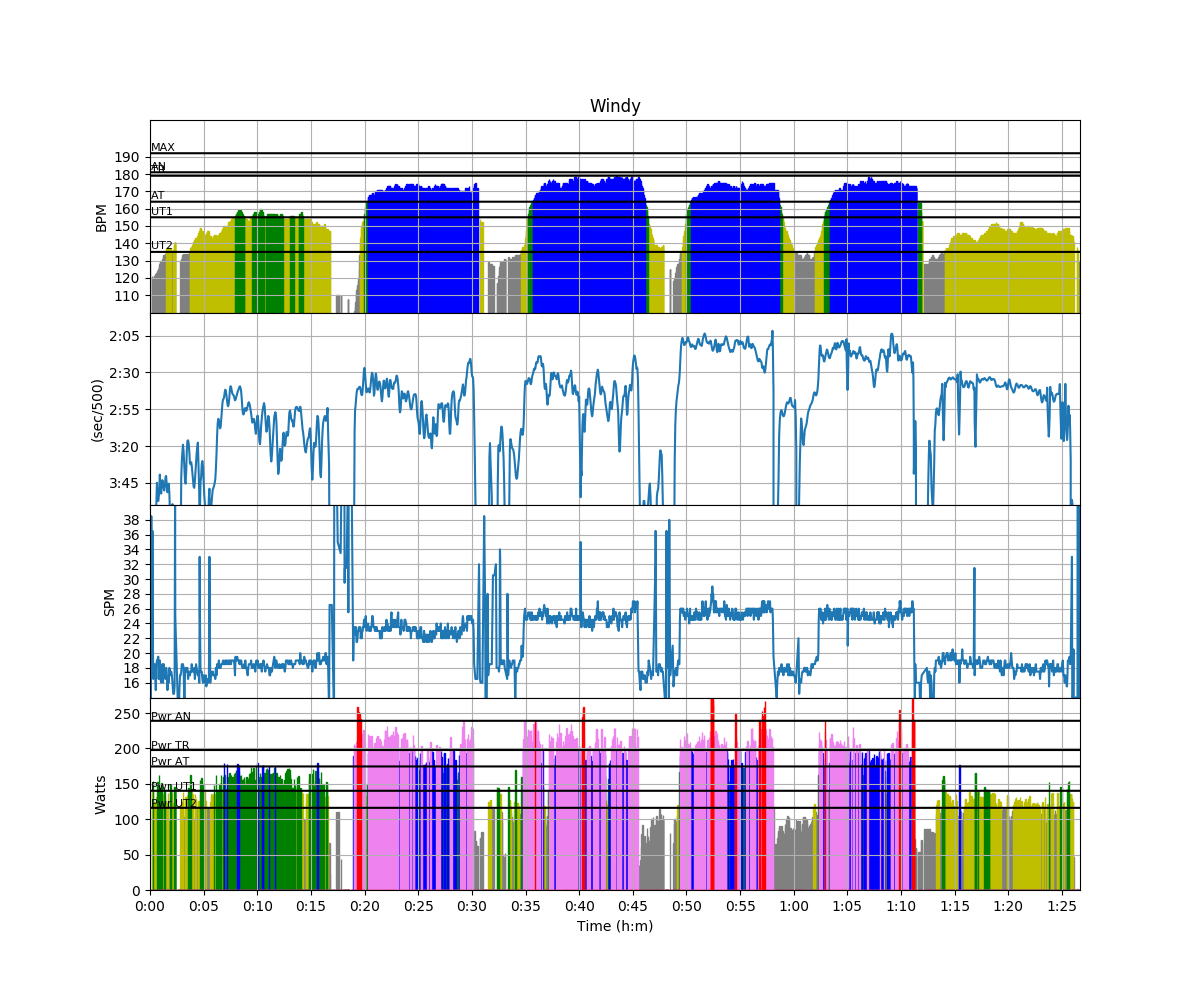 I do have video from the row, but as it’s the start of a new OTW season it’s not perfect. I mounted my GoPro 90 degrees rotated, so instead of a nice wide view, I have a portrait video. Also, I left my Windows computer in the office, and I am still learning the video editing software on the official Rowsandall developer’s notebook, which is running Linux (because developing under Linux is so much easier and the rowsandall.com site itself also runs on a Linux distribution). I haven’t found anything that could replace Dashware to get telemetry data into the video.

While my videos are uploading, I can only show a comparison between Friday’s technique session and today’s choppy, higher rate session:

You can see that I was a bit shorter today, but I find that acceptable given the conditions. Otherwise I think I should be happy with the result.

After the row, I had a nice coffee at the club house, giving me the opportunity to boss around the juniors who were loading my trailer. They are going for a week long training camp on Monday.

It was good to get some good OTW kilometers in the bank.

The first high res video has finally uploaded. The other one will be ready in 40 minutes: