On Sunday afternoon, Dusan Machacek, the president of the Czech Rowing Association, put an event on Facebook. 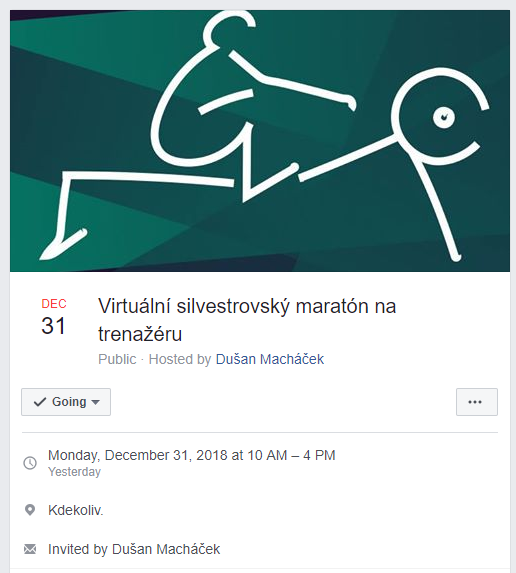 I challenge everyone to end the year in a nontraditional way by rowing with me a full marathon (42195m) on an indoor rower. For those who don’t believe in full marathons, row at least a half marathon…

Where: Wherever your erg is located

Send me a picture of your monitor. Your end time is important, but more important is to finish. I give a bottle of champagne to everyone who finishes the full marathon!

I was on my way to the Janacek Theater to attend the traditional Nutcracker ballet performance when I saw the invite, and I immediately responded.

So on Monday at 10AM I was facing this: 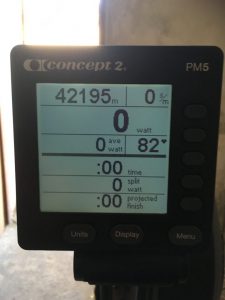 I took a deep breath and started rowing. I was sort of well prepared. I had 1 liter of water, 0.5 liter of “sport drink” (I mixed my own from lemonade syrup with salt added), a towel, some dry clothes, the radio tuned to Radio Krokodyl (‘hit after hit’), the iPhone running Painsled and the iPad running Zwift (using Painsled as the power source) with the Pretzel route (72km with more than 1300m of climbing, which takes about the same time to complete as the rower marathon). I had also prepared by looking up my predicted marathon pace (2:05 pace or 180W) on rowsandall.com.

A few minutes before the race, I had responded to a tweet by Stephen Seiler who shared that he had rode a bike at 202 Watt for 202 minutes. I answered that the geeky rower response would be to row 42195m at 180W in 180 minutes. I didn’t have time to do the math, but I knew 180W is a little faster than 3 hours.

In the first few minutes of the marathon I had fun “solving” this equation using the Performance Monitor. I estimated that 177 Watt would give me a finish time of 177 minutes, so that became the target. (Actually, I solved the equation later and 176.6533 W corresponds to 176.6533 minutes for 42195 m.) The joy of being a data geek.

In the first 30 minutes there were a few interuptions to do with the cats. They are afraid of the erg noise but they have to pass it to go outside. I stopped briefly to let Rudi (one of our cats) pass. I also stopped to sip some drinks after each 30 minutes, and that made the whole endeavor pretty easy in the end. I focused on rowing to the next 10k interval, or to the drink break. Also the “company” at Zwift kept it interesting. Now and then I would end up riding with someone else for a few kilometers. 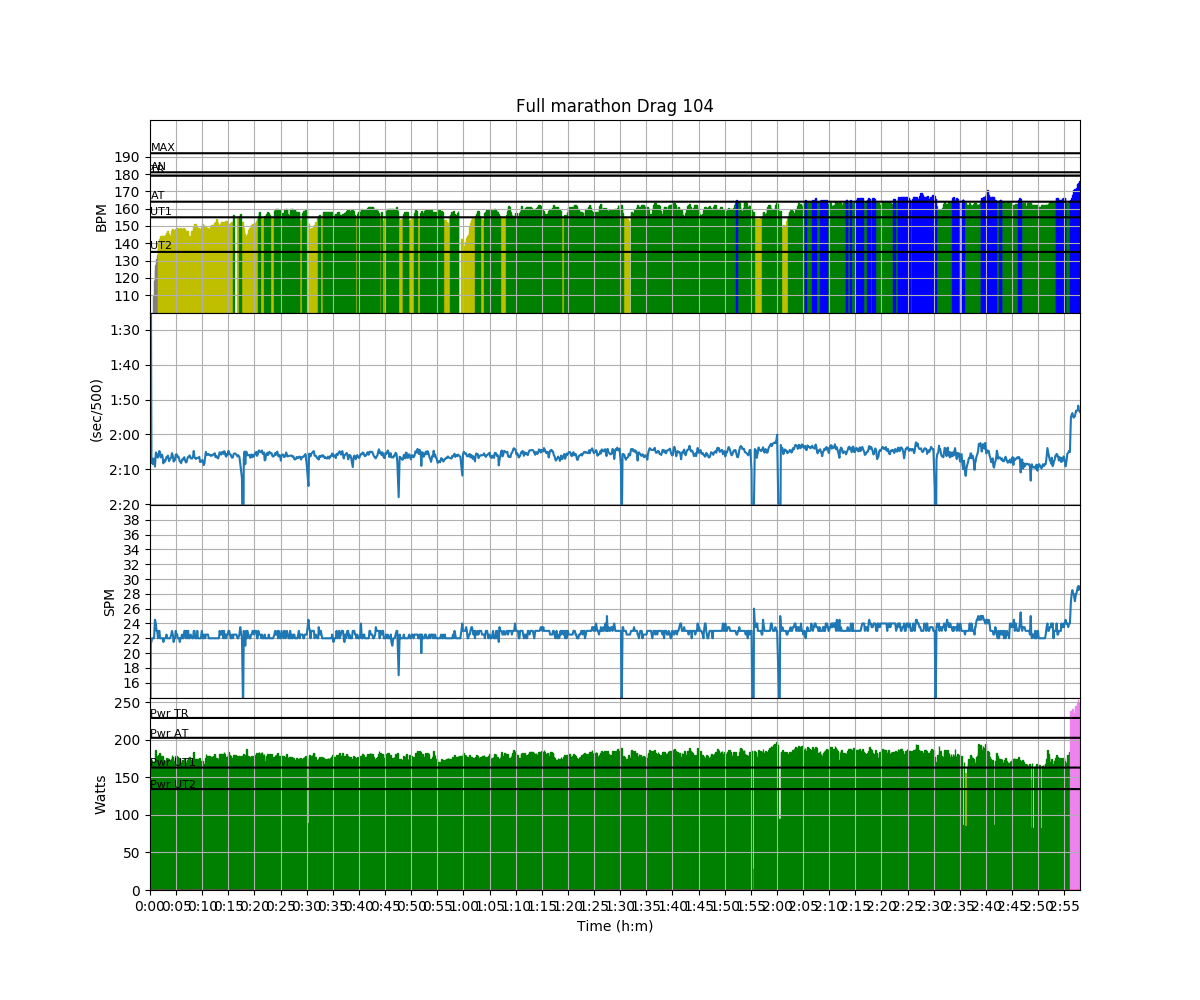 You can see the breaks in the chart. There was an unplanned one just before the two hour mark when the radio stopped playing and I had to plug it in. From about the 1:30 mark I tried to get the average power up to 177W, but after each break it was back at a value around 170. 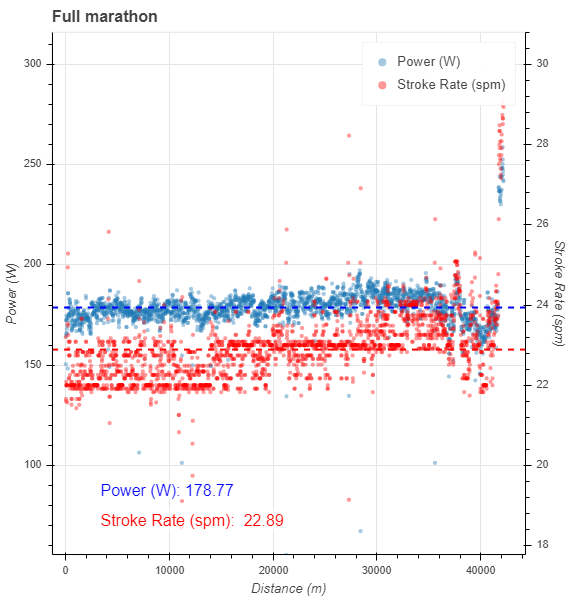 This chart shows how my “dominant” stroke rate jumped from 22spm to 23spm after around 14km of rowing (second drink break). 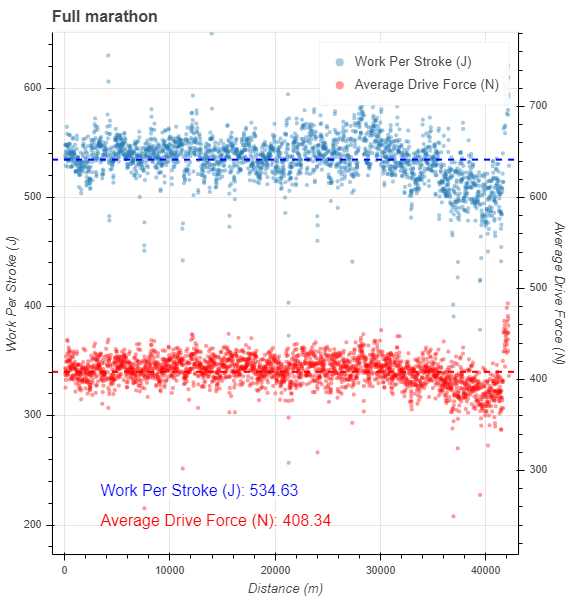 This chart shows how I started to feel fatigue at the 30km mark (12km to go). My legs were still OK and I also didn’t have problems with my back. I had a different problem. Blisters.

In the last 6km, time seemed to suddenly go very slowly. I wanted to be ready, really. I let the power drop a bit too often, and in the final 500m I did a little sprint to at least bring my finish time under 178 minutes.

So, after a little under three hours, the erg silenced. I took a picture of the PM, sent off the CSV from Painsled to rowsandall.com, closed Zwift, switched off the radio, drank some water, wiped the erg clean, collected the (unused) dry clothes and my devices, and emerged from my basement.

It was not as hard as I thought. Actually, the first 21km went by surprisingly fast.

More Steady State After the Marathon