A weights session. My weights trainer was sick, so I had to do it myself. I pretty much copied what she has me do normally. Only instead of bench press I trained a similar motion on a fitness machine. I don’t want to have the bar falling on me (we do go to weights and repetitions where I can barely lift the bar). Also, deadlifts was occupied, so I did the first few intervals with a kettle bell. On the squats, I was careful with the weights, so I added a few intervals on the leg press station, which really did my legs in.

Wow! The first day this week where I had time for a morning row. What a luxury. I was the only rower on the lake at 6, and I shared it with three fishermen. I did a steady state row in the single, with a few higher rate bursts.

My double partner Kazi is in town, so we did two sessions. The first one was a 8x500m/500m workout.

That went pretty well. What was even more fun is that we used Quiske pods under both our seats, so after the row (and after a quick swim in the lake), we settled on the club balcony, had a beer and fired up the computer. This is what we saw: 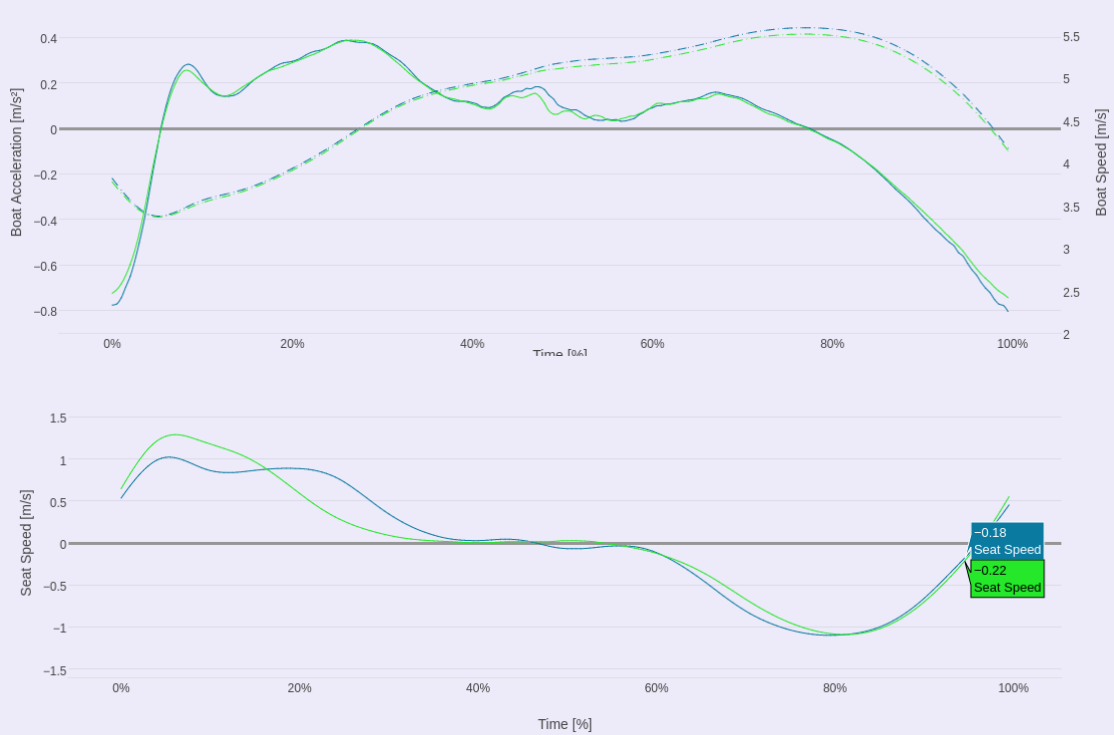 So stroke seat (that’s me) is the green line, and bow seat (Kazi) is the blue line. This was taken during one of the 500s, but pretty much all the 500s showed the same picture.

Now the big question is if we would go faster if we would be more matched in terms of seat speed. I am not so sure. Here’s a picture of this crew during the 2018 edition of Euromasters (which they won).

The afternoon training was technique and drills. We rowed with pauses. Then we did the catch drill. Then we rowed without feathering. And finally, we tried out the “Chinese drill”. Greg from Quantified Rowing has done it in his Shanghai row (see the blog post about it).

It was fun to do. We started from rowing with pauses at 3/4 slide, hands just before the wing rigger, at every third stroke. We gradually lengthened the pause until it lasted 3 seconds. Then I added the “Shanghai drill”, hooking the handles under the wing rigger, clapping hands, grapping the handles again, and making the catch. We took turns doing the Shanghai drill with the other rower just pausing. And then it was time for the big moment.

It was fun, and it went surprisingly well. The trick is to be really stable during the recovery and to be really controlled and synchronized when you put down the handles, clap the hands, and grab the handles again. We liked it so much (and we liked the admiring looks of the girls on the stand-up paddle boards) that we rowed the entire 2k course clapping hands on every third stroke.

We did a 500m swim in the lake after the row, and then it was time to go home.