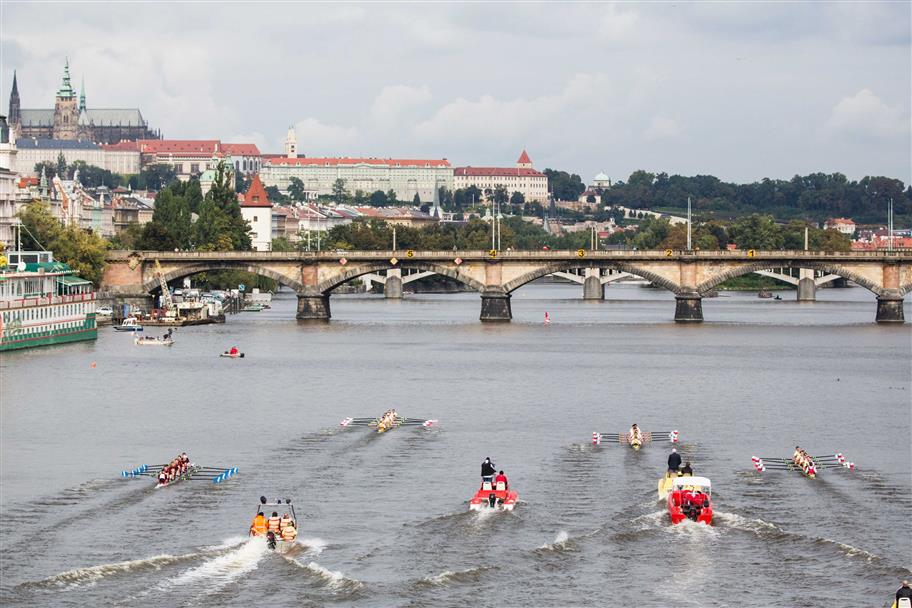 The picture (from a previous edition of the Primatorky regatta) says it all. Racing in eights in the center of Prague. By the way, that is our club’s men’s eight in the lane on the left, and I believe the picture is from the final race on Sunday, two years ago.

The racing happens between the Rower’s island and the finish at Naplavka. Naplavka, the river bank, being turned into a sponsors’ market, offering products from gourmet ham sandwiches to Lexus sports cars.

The special thing about the race is a giant turn after about 800m of racing. Every lane has a big colored buoy and it is a huge turn they are doing:

But first things first. It was Saturday morning, June 8, and Romana and I drove to the club in Brno to pick up our trailer with the rental boats for the camp. We would bring it to Prague to be picked up by Wintech Czech Republic.

The long drive on the D1 highway was thankfully uneventful. And that is almost a miracle. Here is my list of things to bring on a car ride to Prague over the D1: 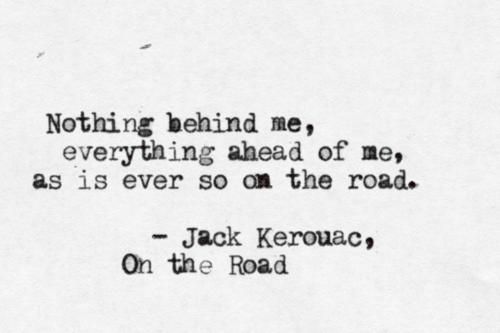 Well, there was some excitement. News from the race course.

Yes, coxing is hard on this course, and unfortunately the disqualifications were entirely the result of our coxswain’s errors. That said, it was very hard for the cox of the Juniors. They had put a young and unexperienced boy on the cox’s seat. This 13 year old is a good cox on our home lake, but I don’t think he was prepared for the pressure of racing.

We arrived in Prague, I moved the singles to the agreed place where Wintech would pick them up, handed over the bag with NK Empower Oarlocks to a guy nicknamed “Navy”, and I took some pictures of Robin preparing for his semifinal:

They won their semi.

A quick lunch, a stroll through through the finish area (I bought a polo shirt) and a few hours of hanging around in the CVK Praha club house and it was time for us to launch our Masters 8+.

Our preparation has been abysmal. We didn’t manage to get in more than 3 practice rows. I think we were in our weakest form in years.

And we were the crew to beat. We have been winning this race 6 times in the last 7 years. (Last year’s edition was canceled due to a ferocious thunderstorm.) The one time we didn’t win, it was due to a grossly unfair start and the race was declared undecided without a rerow.

Three clubs from the Prague region had made a “Sélection de Raisins” in order to put a strong eight against us. It was all very exciting.

Off we were, about 2 strokes behind CVK Praha who started at Attention, and slightly behind the combination crew to our left. Coming in behind, we started to pass the two crews. It took about the first 500m to get back and then disaster struck. CVK Praha to our right and the combination to our left both started to go off course and they basically closed us in. We raced a few strokes with clashing blades, then with our hands in the air as protest, and it took ages for the umpire to decide to stop the race. He waved the red flag and we stopped rowing. Then he blew the horn to alert the other crews and they stopped rowing as well.

With something between 650 and 750m in our legs, we turned the boats and rowed back to the start.

Of course, this was a tremendous advantage for us. CVK Praha was disqualified. I think the combination crew should have been disqualified as well, but the umpire claimed that we started to go off course as well.

Here is our GPS track. In the race, we are going from the bottom to the top in the two tracks on the right hand side, the straight one being the second start. Looking at the GPS track, I think the only thing our coxswain did was to try and avoid boat damage when the other crews were coming off their tracks. But it’s hard to tell.

Anyway, a second start. I didn’t mind, but I was a bit worried about how much our less trained crew members would have left in the tank.

We started well and were leading right out of the gate. Then, unfortunately, the combination crew took over, underrating us but going faster. By the railway bridge, with 350m to go, my 2 seat was level with their 6 or 7. We rated up (from 38 to 42) and tried to pass them in a final push. However, fatigue made it hard to row well and although we managed to speed up and we were faster than the opponent, we lost by a bit.

Exciting racing. Disappointing result, although I think we didn’t really deserve to win. We need to prepare better.

After the shower and a beer with the disqualified CVK Praha crew in their club house, we all went to the Bohemians rowing club for the Masters Party. It was great. Of course, we were being made fun of: “Why do Brno rowers race with one hand in the air? Is that how they teach to row in Brno?” but there was beer and wine, live music, good food and dancing. I’ll leave the rest to your imagination.

On Sunday morning, Romana and I saw our son Robin get a second place in a very good race, and then we hit the road again. Back to Brno.