A planned rest day. Note to self. A rest day means going to bed early. Recovery has a lot to do with sleeping well and sleeping enough.

Unplanned “rest” day. I arrived home from work, looking forward to doing a steady state workout. I found the house dark. My daughter Lenka was in bed with a fever. As the rest of the family is out in the mountains (it’s school vacation), she had been alone the entire day.

So I scrapped the training and headed out to the pharmacy. Also had to do the groceries which I thought Lenka had done.

I worked from home in the morning, to make sure Lenka would be taken care of. As I was up pretty early, I had time to do my Tuesday’s workout before my first call.

Nothing special. A bunch of longer intervals rowed at steady state pace. I did however put the Quiske pod under my seat pad and rowed with the Quiske app. I am not going to go into details about the Quiske app, but the essential thing is that it measures your instantaneous handle and seat speed and is able to make recommendations about your rowing style based on that.

The app gives you live feedback on how you are doing versus their ideal style.

I have to say that I would like to distinguish between “technique” and “style”.

The picture above shows the famous classification of rowing styles. You can row any of those styles without technique flaws.

Anyhow, I was curious to see how I would fare. Here was Quiske’s summary after 20 minutes:

So all yellow and one red, nothing green. That isn’t very good, isn’t it? Well, I opened the debate about this with the developers of Quiske. You can read it here on the Rowing Data Facebook Group. 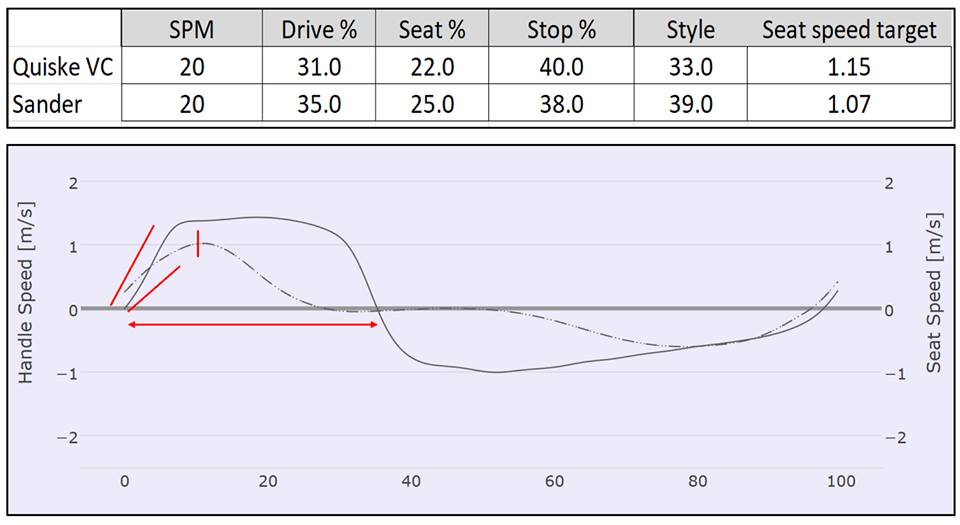 So in this picture you can see a chart of my typical handle (solid) and seat (dashed) speed during a rowing stroke. The table above it gives you the “Virtual Coach” ideal values versus mine. You can see that I am not so far away.

It’s funny to see the data versus how it felt. I am (I think) very consciously working on leg push and a more phased stroke (legs, trunk, arms) but to get the balls green during the row I had to change much more than I thought I would have. It felt very awkward.

With a coach present in the erg room, normally you would get corrections immediately. The Quiske system is great for basement rowers like myself, to get honest and factual feedback.

I would like  the Quiske app to be programmable to a certain style, though, as I think coaches should have the option to promote the style they think is best, as opposed to having it prescribed by the developers of Quiske. On the other hand, I understand how labor intensive it is to develop a set of metrics that correctly catch a certain style and quantifies deviations from it (at various stroke rates), so I don’t see this as a major issue. You can always look at the curves directly.

And as my preferred style does approach what Quiske recommends quite well, I am going to use it more often. 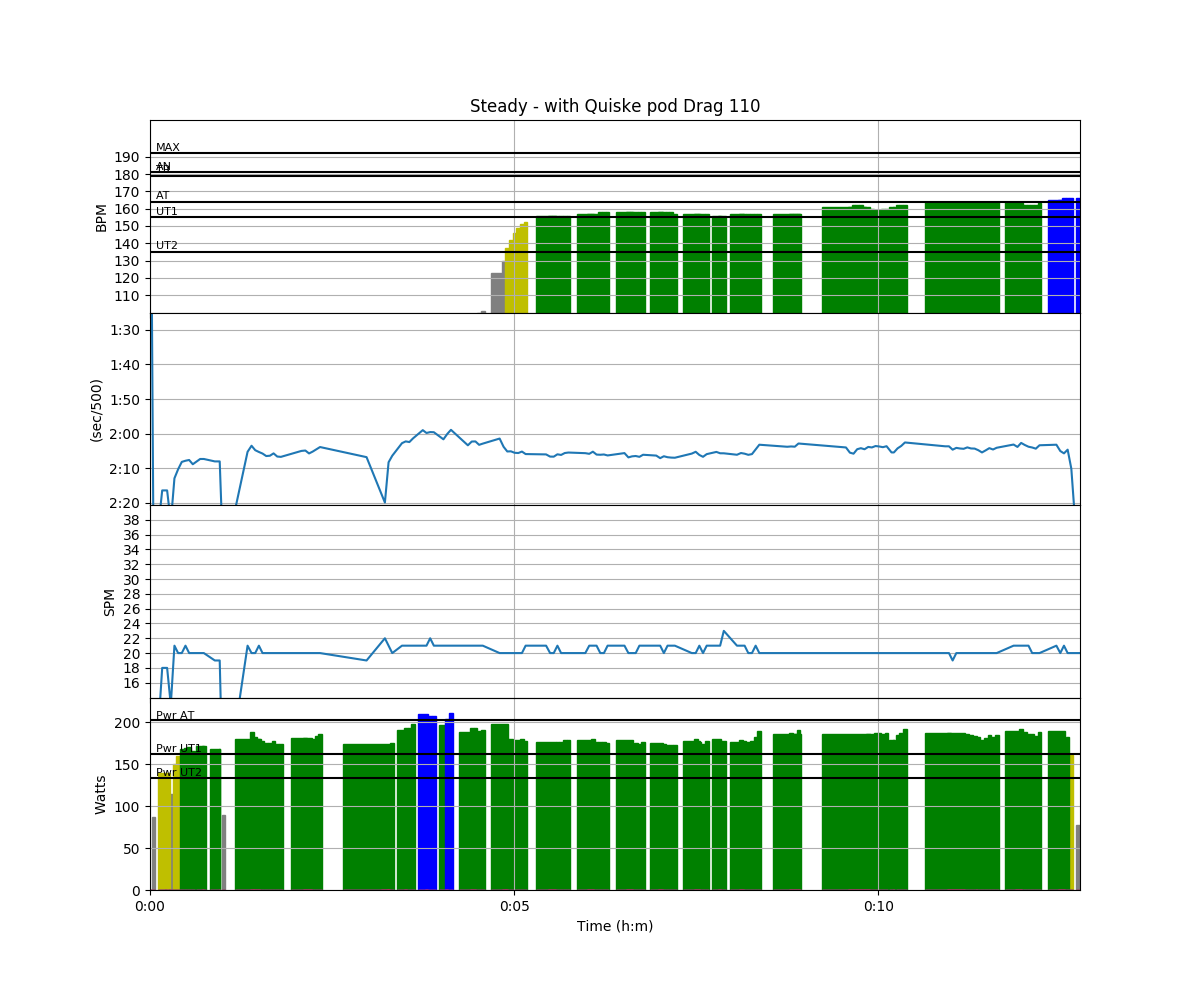 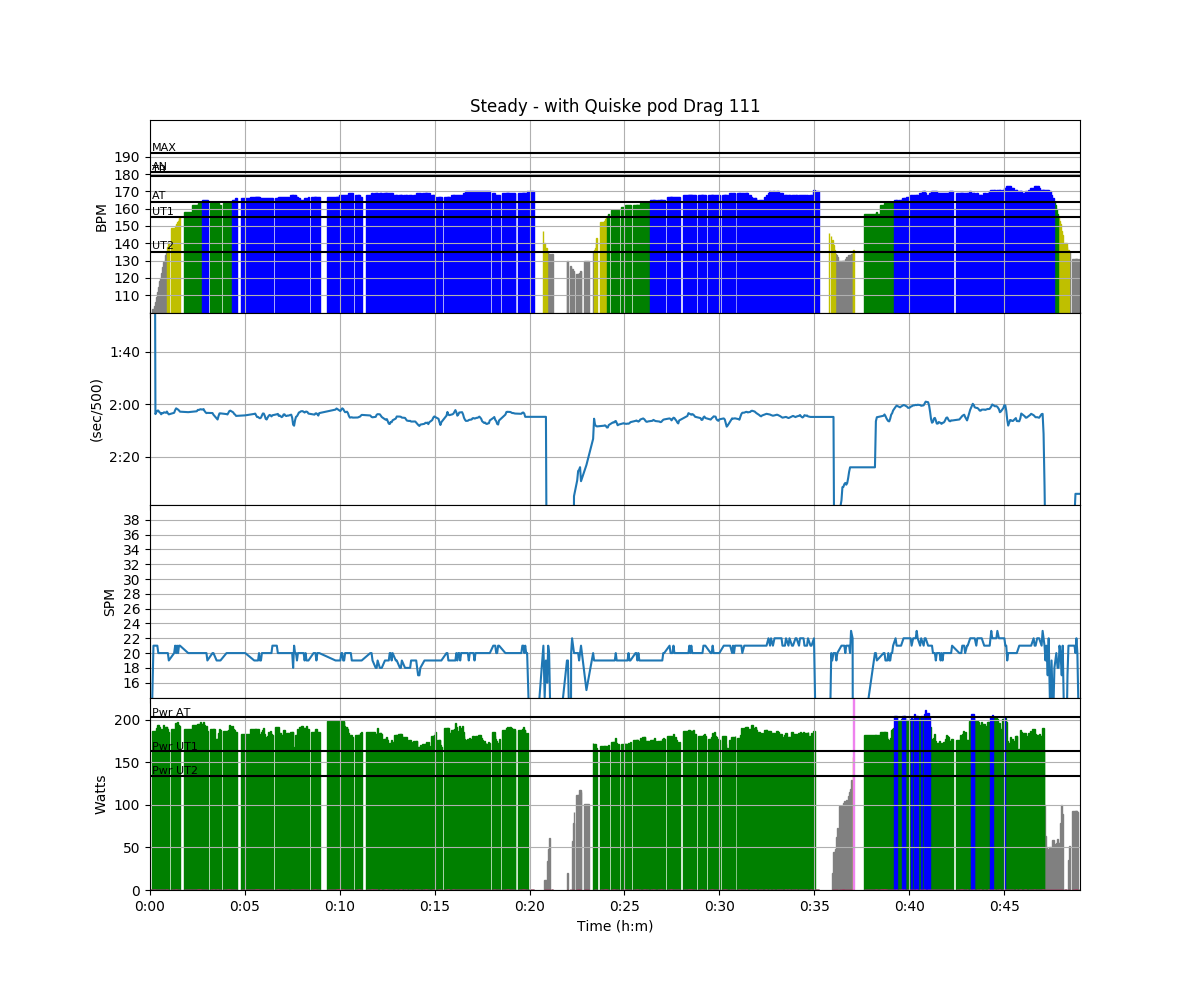 I seem to be suffering from missing strokes in the data stream. Not sure what is the culprit. This time I was listening to classical “ether” radio, and the only bluetooth connections were between my iPhone and the PM, the OH1 and the PM, and between the Quiske Pod and my Android Phone. Usually I have an additional Bluetooth link between iPad and iPhone (for Zwift) and between the iPad and the radio (for music).