Head Race Day! I was up early, far too early. The town of Uherske Hradiště is an hour drive east of Brno and our race wouldn’t start until 2pm. We left Brno at 9:30 after picking up my club mate (and competitor) Eduard. The early departure time was to allow Romana to coach one of her Junior girls.

Arriving in Babice, at the place of the start of this 6km race, we found sunny weather, fair temperatures and a nasty head wind. The race is down stream on the river Morava, but the river was low because of the draught and there was very little flow. Actually, it would be wiser to stick to the middle of the river to avoid rowing into shallow parts. Still, a head wind blowing against the stream could potentially lead to some chop.

I contemplated setting the sculls a bit lighter, but then thought through the consequences and decided to not do it.

The race went pretty well. I started off and settled on my target 230W, not worrying about the stroke rate too much. I knew the stroke rate would be a bit lower in the head wind, and focused on hitting the power and work per stroke target. I also counted series of 30 strokes, 10 strokes focus on sitting straight at the catch, 10 strokes on legs, 10 strokes on back swing.

The course has a few turns and it was always a surprise what the wind would do after the next turn. At one point, about 1600m into the race, the wind really kicked up some waves. I hit a wave with the bottom of my right blade and nearly capsized. It stopped me for one stroke, then I continued to struggle into the head wind. I had no pace information on my SpeedCoach, and kept trying to hit my power targets, but in the middle 2km, the roughest bit, this was pretty hard.

I was rowing away from the guy behind me (David Ulc) and catching up on someone in front of me, but I wasn’t sure if that was Tomas Zeman or Andrej Hudec. Only at the finish line I found out that Tomas had taken over Andrej very early in the race.

I was worried most about Tomas Zeman and my double buddy Kazimir Nedoba. In the sprint season, Kazi had been faster, but he is fast mostly in direct confrontations and has difficulty rowing in the loneliness of a head race with 1 minute start intervals. Tomas, I had beaten him numerous times in a direct 1k confrontation, but he’s a big guy, a fire fighter, and the “indestructible man” body type. I feared that he could be fast into the head wind.

The first 4km went by pretty fast. The only annoying thing was that my left oarlock started squeaking quite a lot. The fifth 1000m interval started to hurt and the final 1000m hurt a lot.

I had missed all the kilometer markers, but I didn’t really had to look for them, having reset the SpeedCoach just before the start and showing distance rowed in the bottom left bit of the screen. I also saw the first houses of Hradiste, the water got calmer, and I knew it was time to rate up.

The final 500m were really painful but I wouldn’t let myself rate down. I knew it could be a close finish between me and the other contestants, so I wanted to get out as much speed as possible.

I collapsed at the finish line, chatted with Andrej a bit, then did a 2km cooling down row.

Meeting the other Masters rowers in the boat area, we all decided to go for a quick beer before loading our boats on the trailers. On the way to the club house we stopped to look at the results:

Second place for me, “only” ten seconds behind Tomas. Looking at the 2k and 4k times, it is also clear that I lost most in the middle 2k and made up for that in the final 2k.

We had our beer and then we received our prizes in a mini ceremony. I got a nice medal, a T-shirt, and some sweets. Tomas got a cup and a bottle of home made Slivovice. Oh, and we all got kisses from Mrs Tomastikova, the charming club president of Moravia Rowing club.

Here are the race charts. The overview chart and a few comparisons with a year ago. To do justice to the comparison, you have to know that a year ago the river was high and flowing fast. This year, I spent 4 minutes longer on the course. 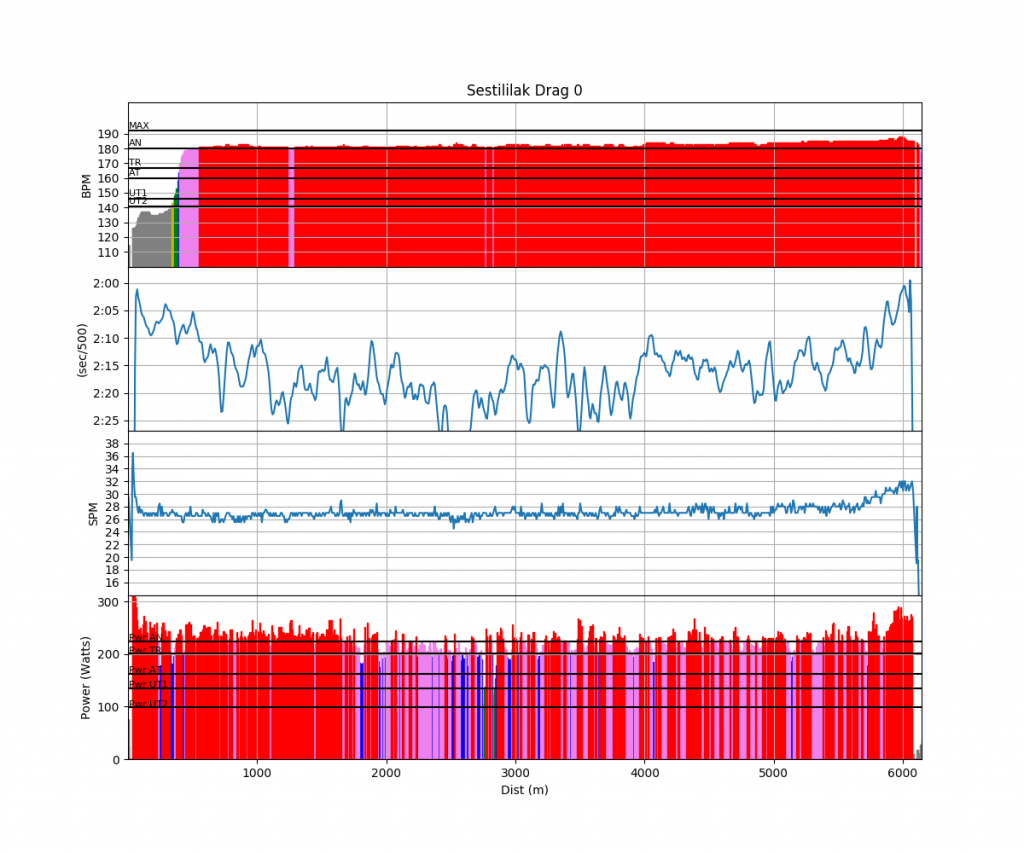